I hope I can do justice to these two magnificent cities.

This Medieval hilltop city was about an hour’s drive from our farmhouse.

To reach the city from the car park, we would have to cross the ‘ravine’.

So, down we went & up the other side ( Basilica of San Dominico in the background). 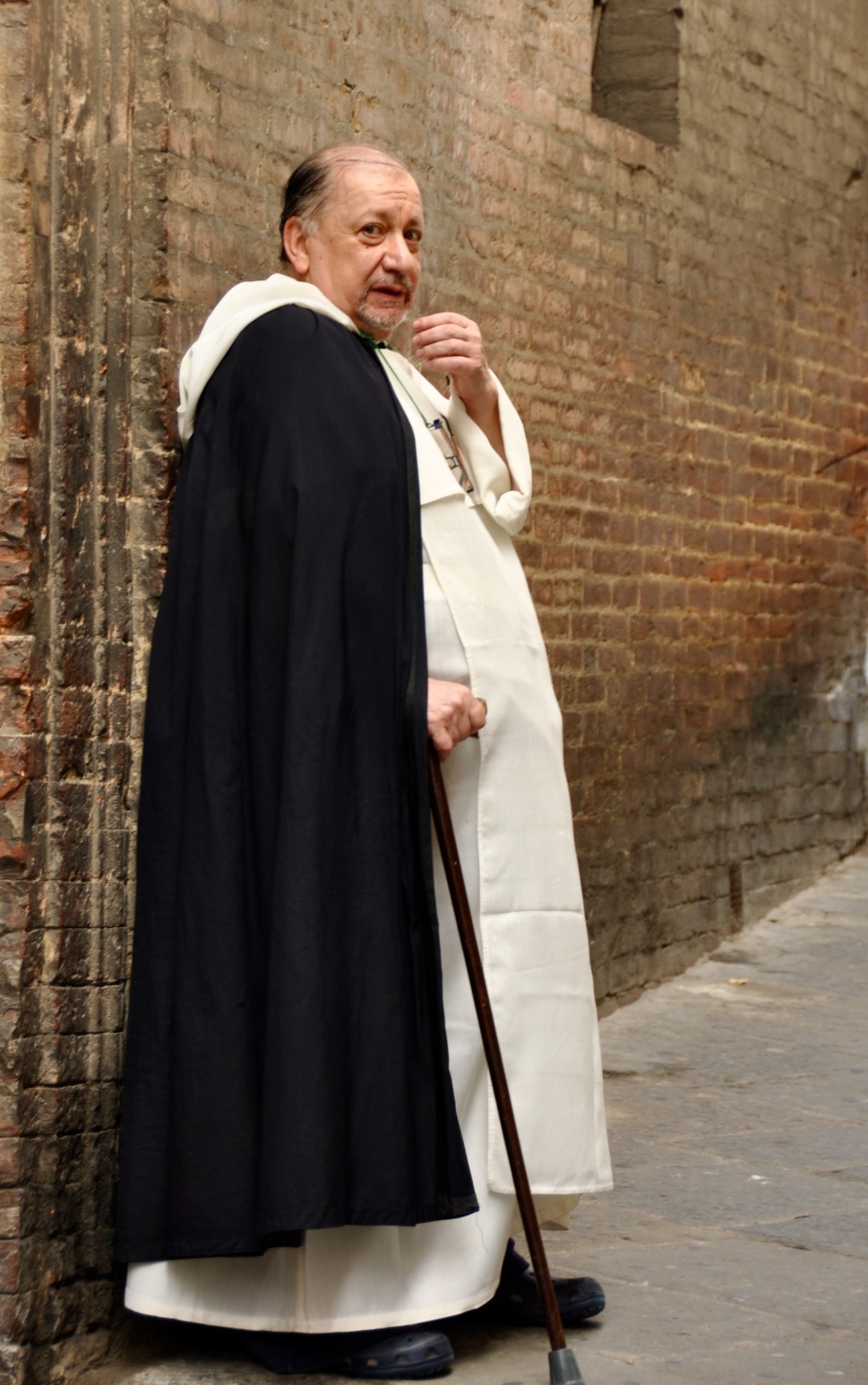 At one point, we felt that we were being “watched over”!

We wound our way through the streets and soon we found ourselves…. 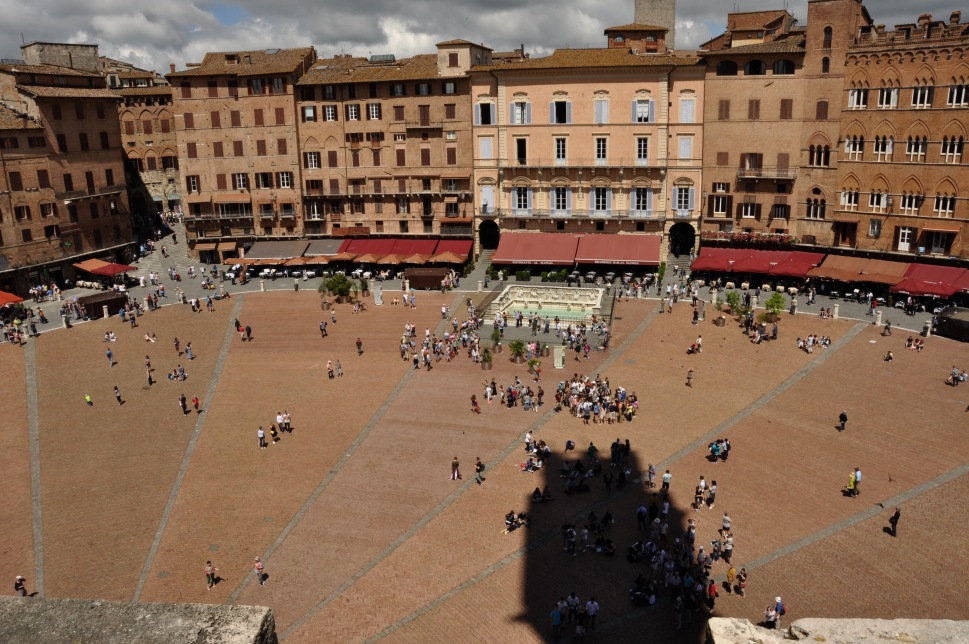 I had seen pictures of the Palio  ( this is an interesting YouTube clip of the event ) and the architecture and event had captured my imagination from the start.

I took a picture of an old photograph in a shop window.

With my fear of heights, I didn’t know how far I would get, but would go as far as I could!

I got as far as the bell tower and had to be content with that.  Jouko went all the way to the top.

The weather was perfect to take in the vistas. 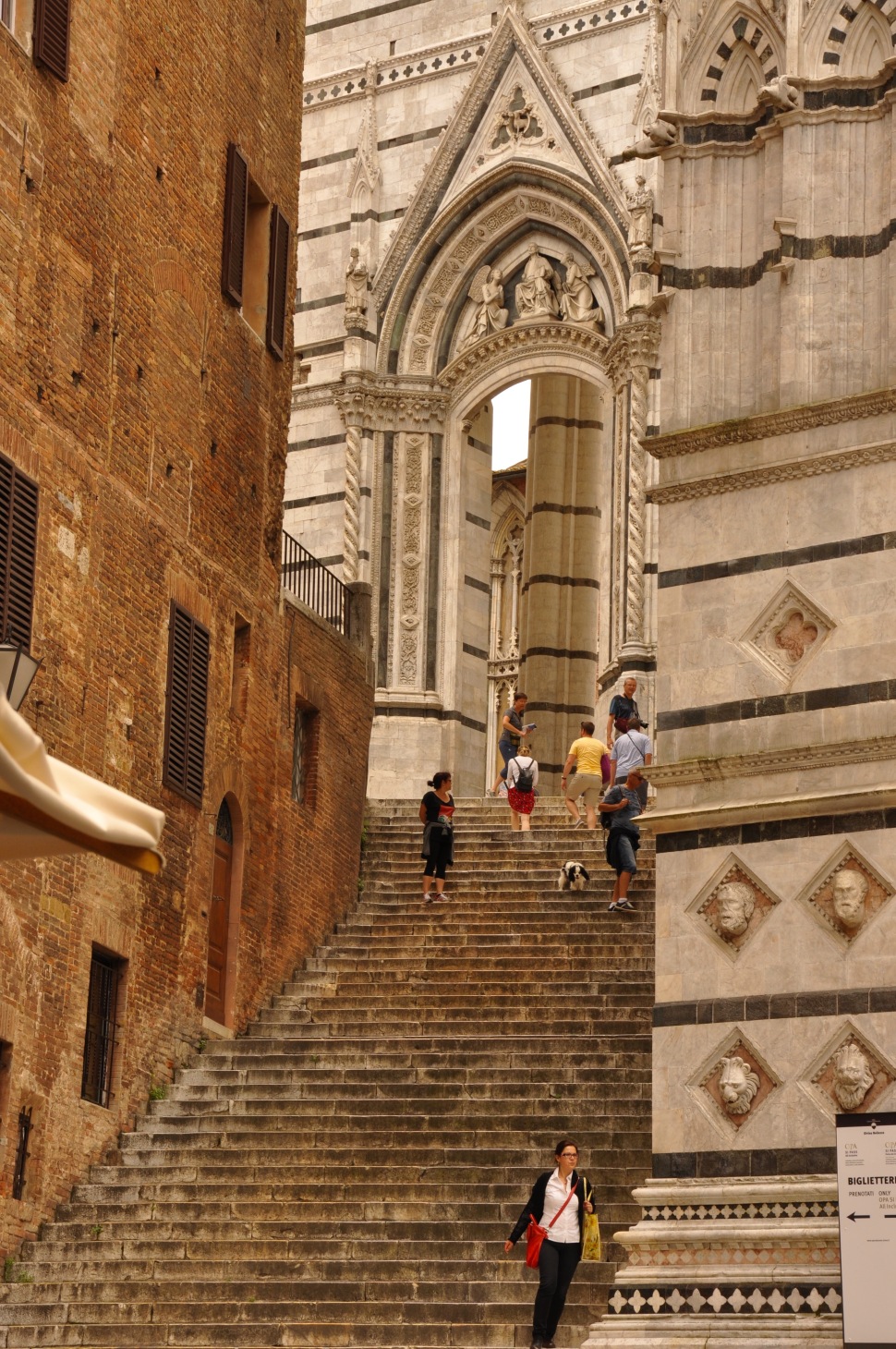 Then we made our way to the Duomo – cathedral.

I was not prepared for the beauty of the interior, which almost moved me to tears.

The black and white marble layering and patterns just takes your breath away.  Dark. Imposing. Ethereal. 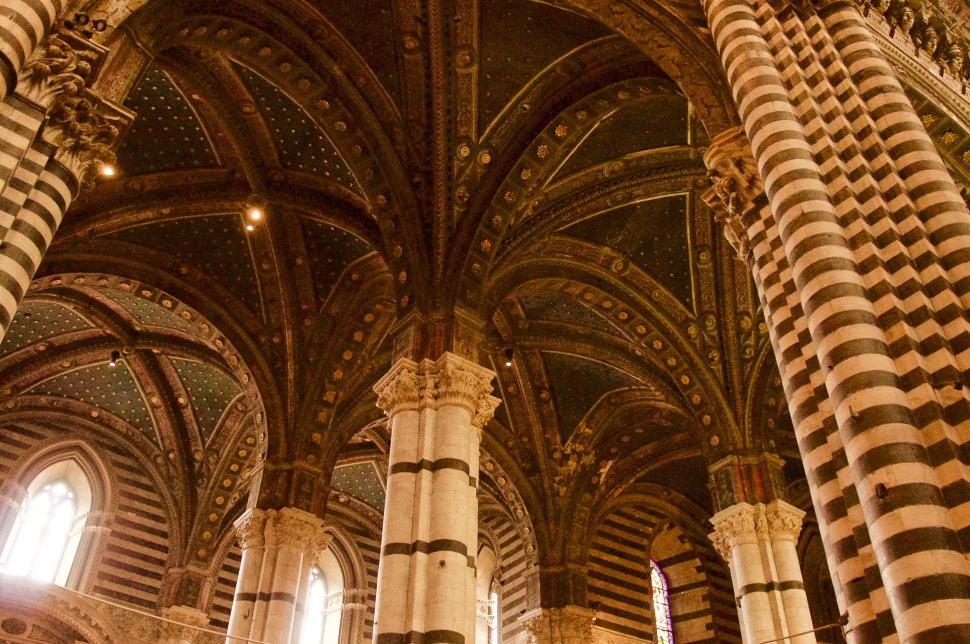 But the beauty lies under one’s feet, too.  This exquisite floor took 600 yrs to complete!

(For some more picture of the floor look at this link)

Some parts are protected by ropes, but others are covered up entirely and only uncovered for special events.

Unfortunately the marble pulpit by Nicola Pisano was covered up and under restoration. 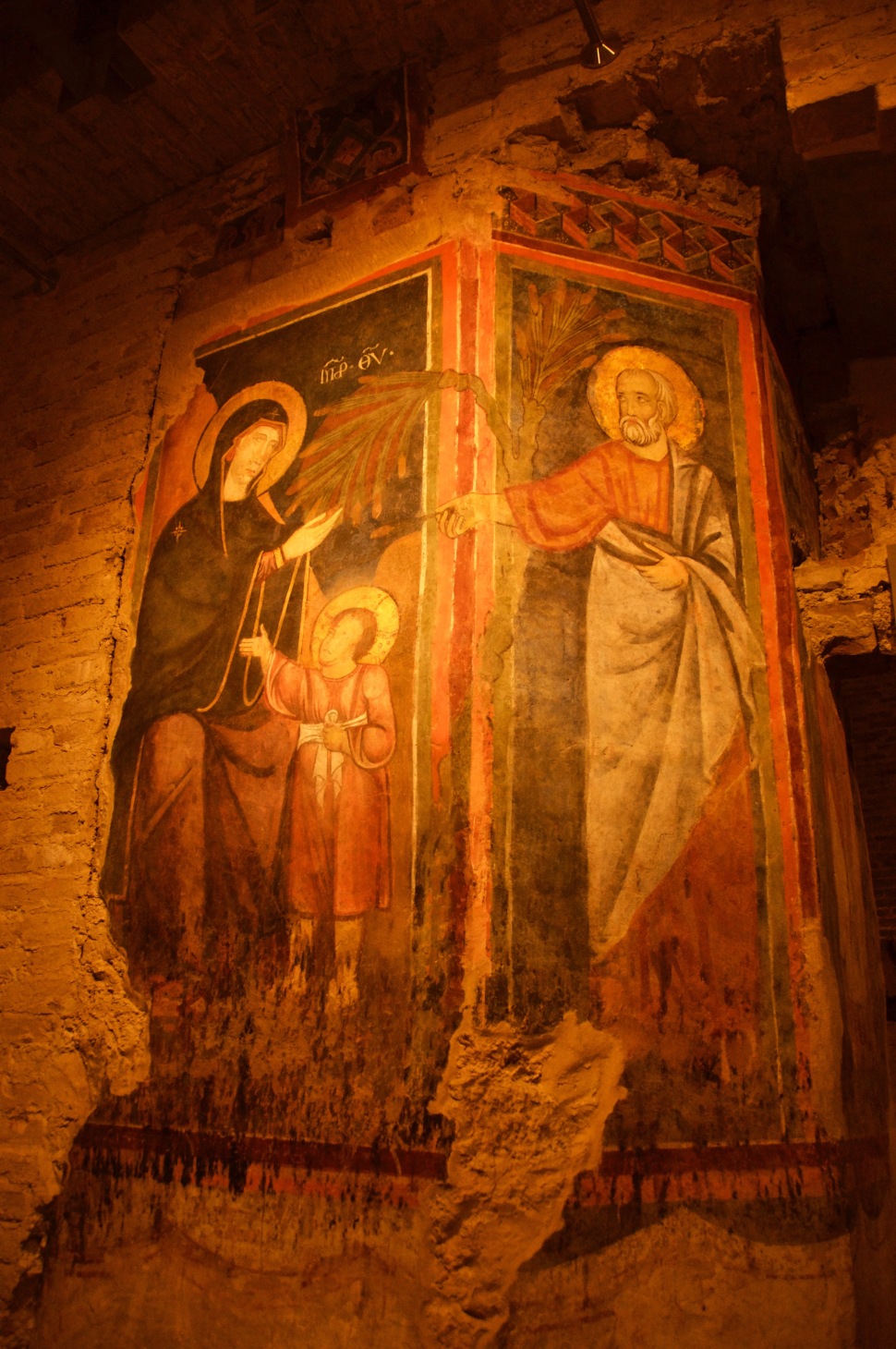 Altho the crypt was created at the same time as the church, it was covered up and used as storage until 1999 when it was rediscovered.  The colourful frescoes are bright and look so fresh. 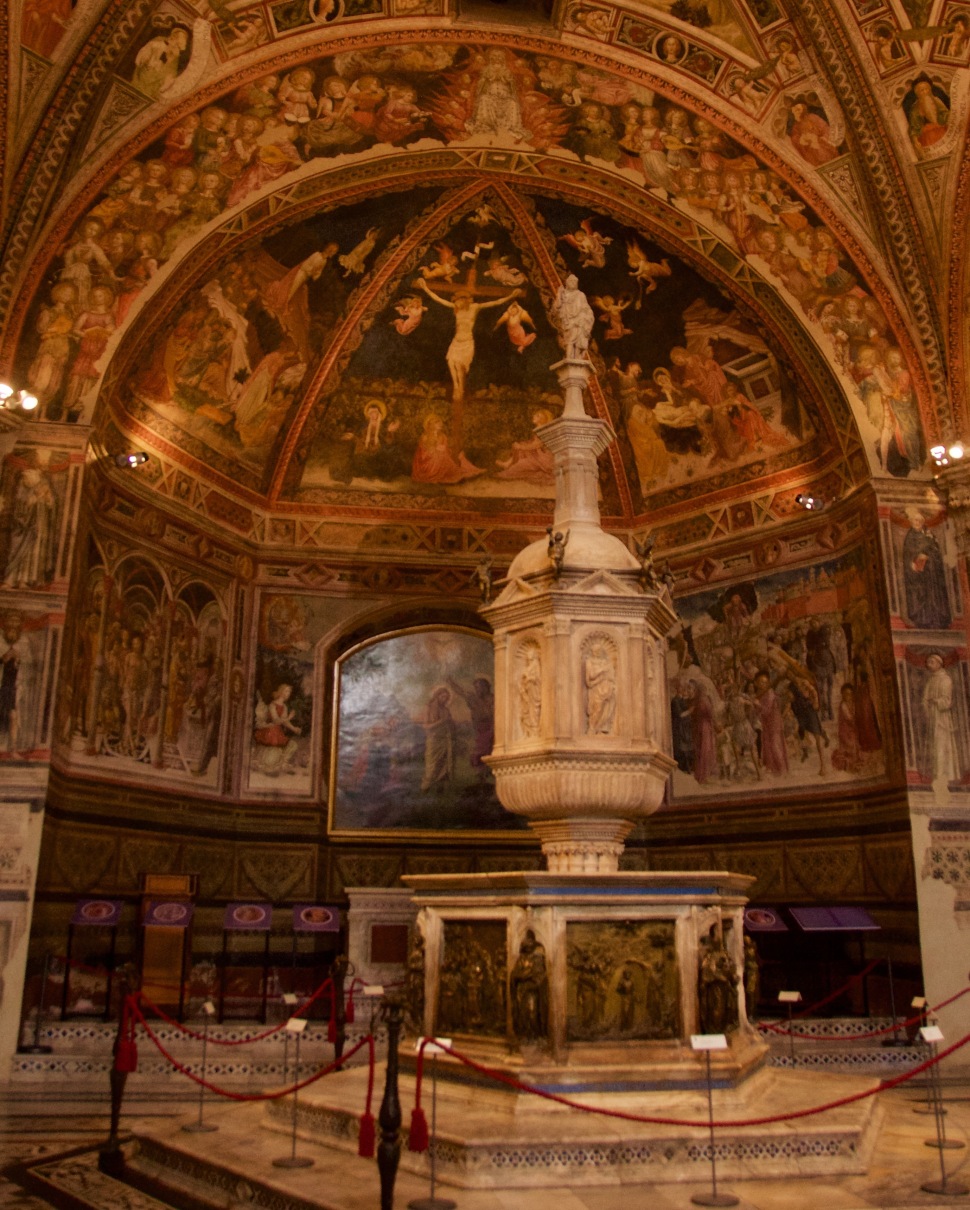 We made our way back to Piazza del Campo,

Because it is built like a concave shell, it invites lovers, day-dreamers, children and scholars to rest and enjoy it’s beauty.

A group of American students getting a history lesson. 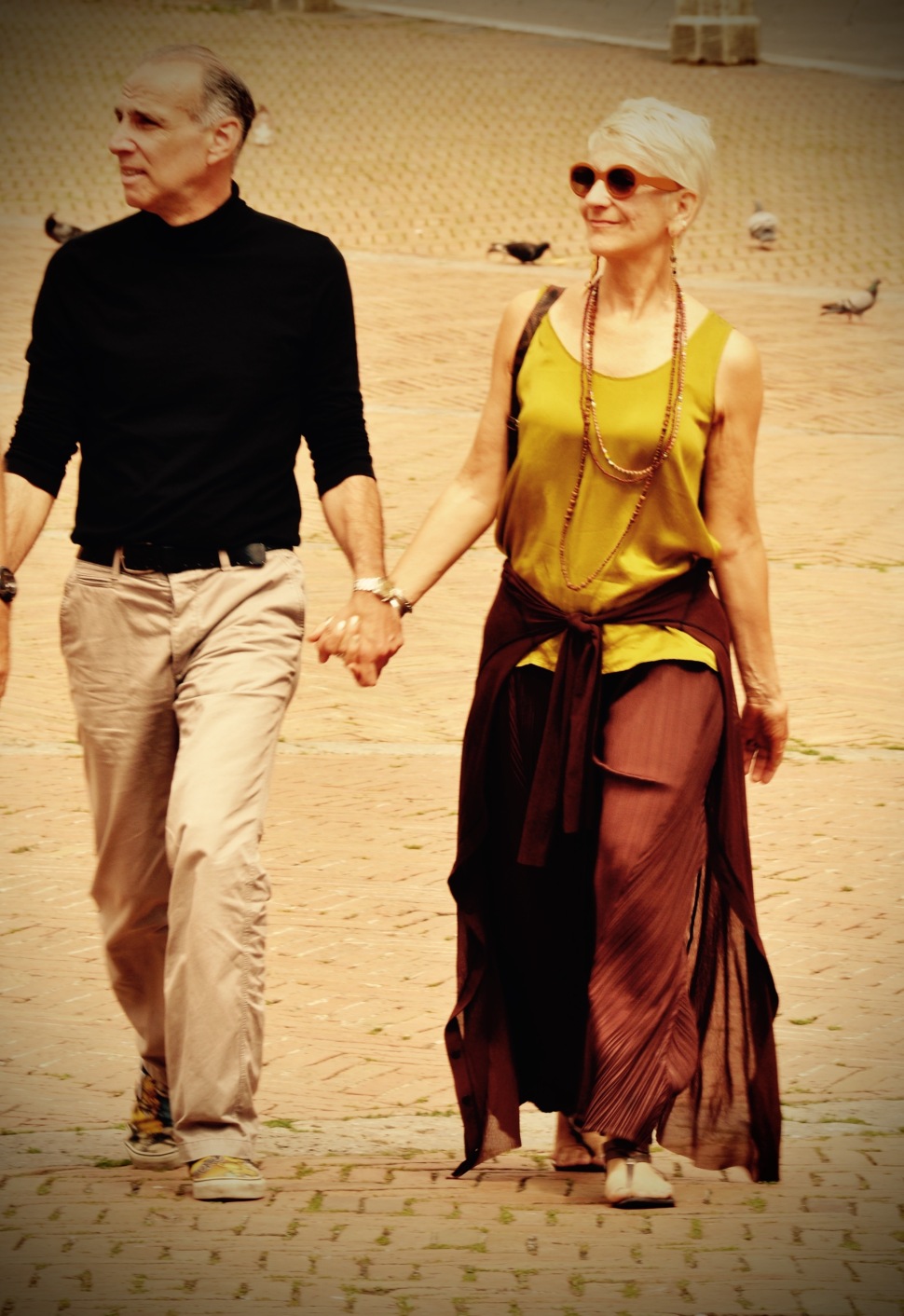 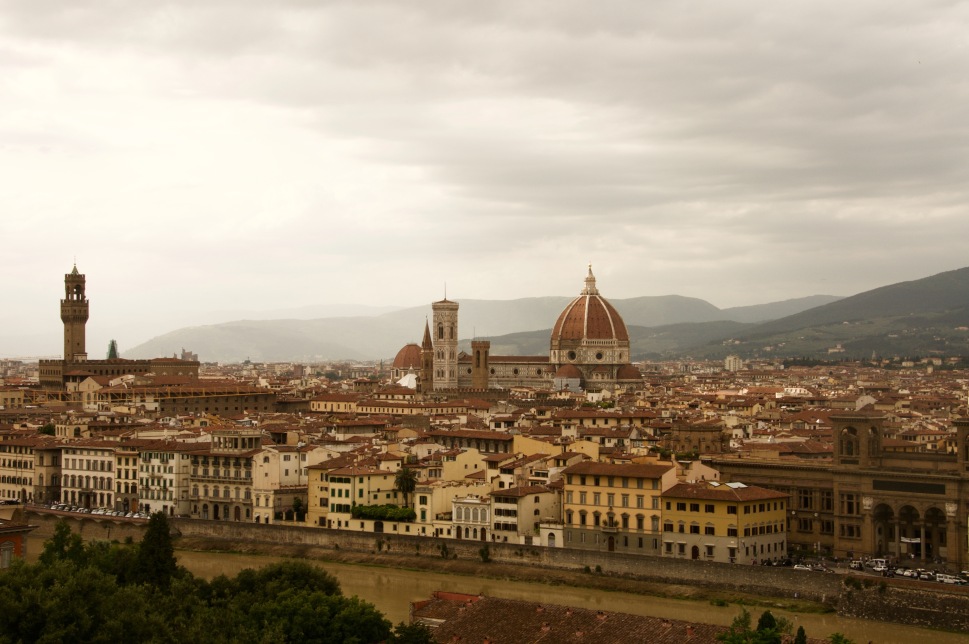 We were fortunate to find a parking place in Piazzale Michelangelo and there was Florence spread out before us. 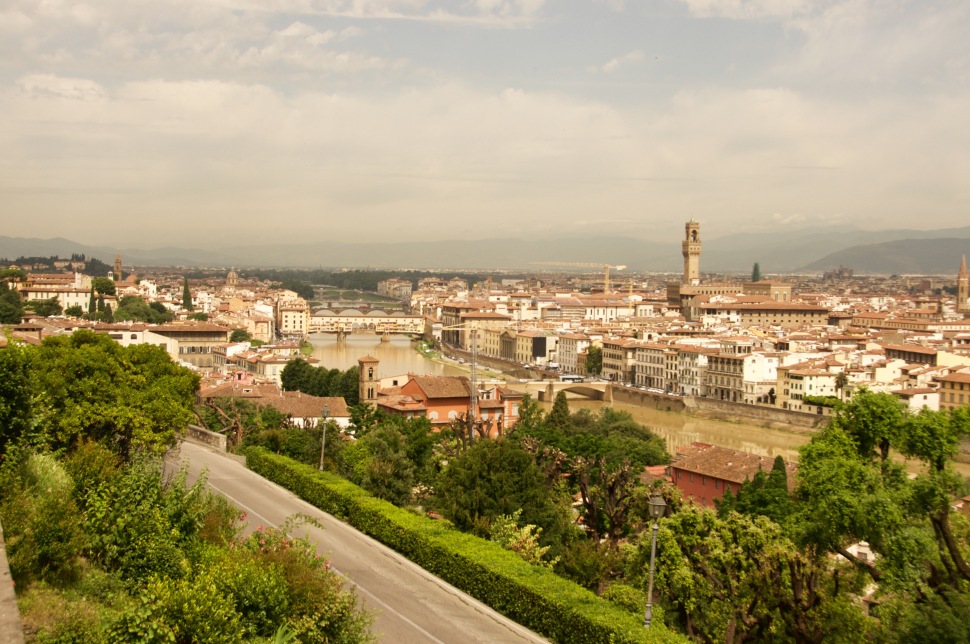 Built on the Arno River, with many beautiful bridges. 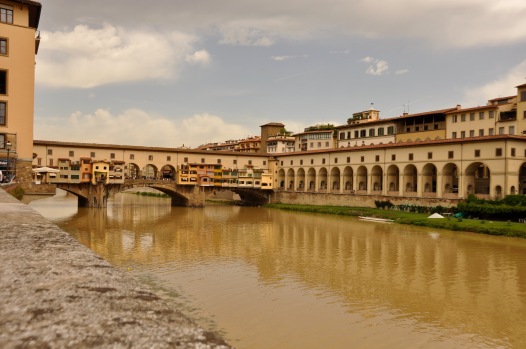 The most famous one is Ponte Vecchio,

and the beautiful Ponte Santa Trìnita. It was rebuilt in 1958 after the retreating German army destroyed it. 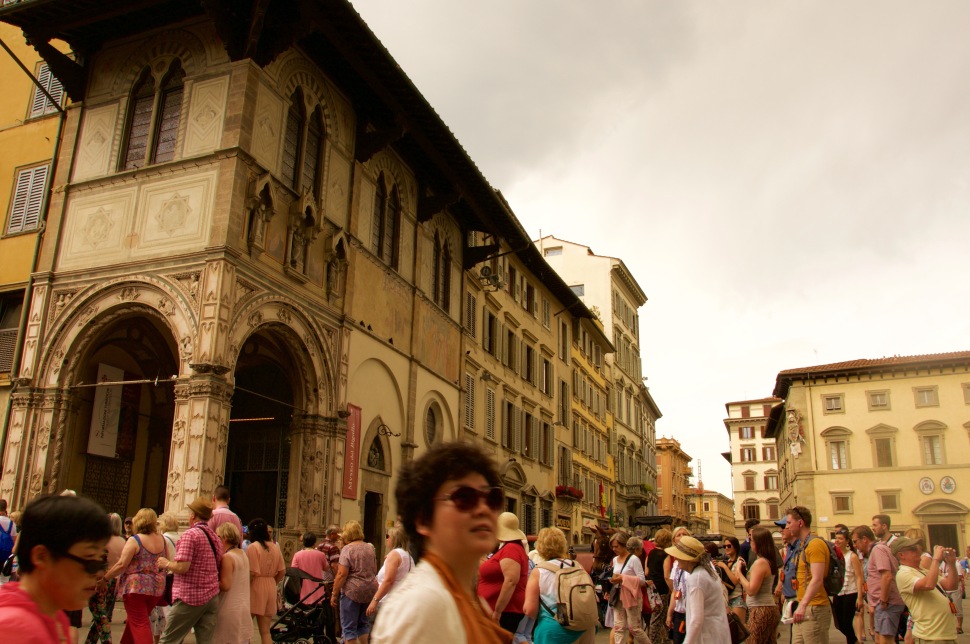 We visited Florence right at the end of our stay in Tuscany.  Quite honestly, I think we had put it off because over the almost 2 months of being in Italy, we had seen so much extraordinary art work; so much beautiful architecture, that we were feeling a little overloaded, if that makes any sense?  Also, we knew we would have to battle the crowds…… 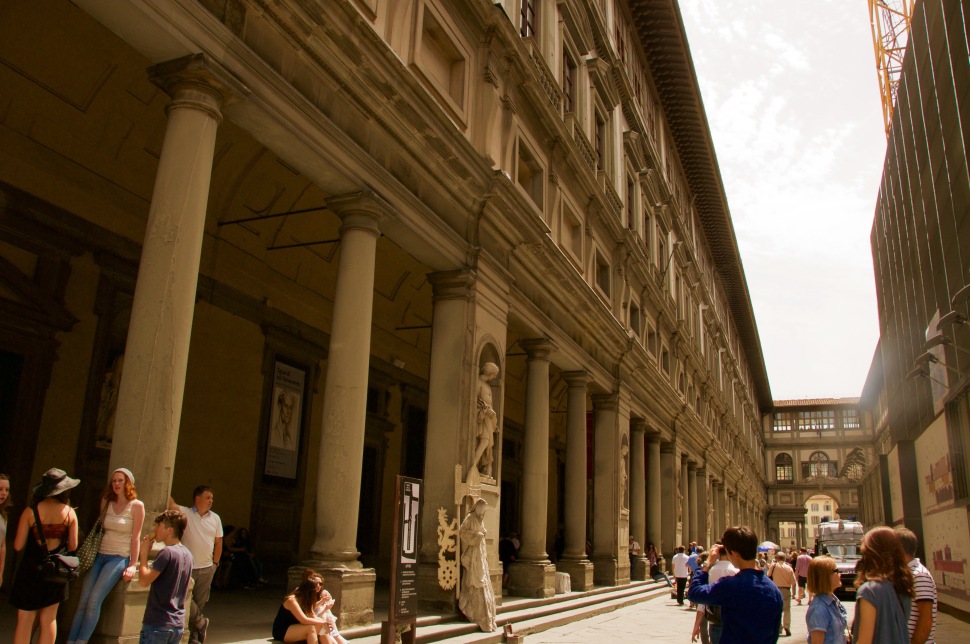 The Uffizy Gallery.  We made the mistake of thinking we could get tickets on site, but the lines were so long, we didn’t even try. 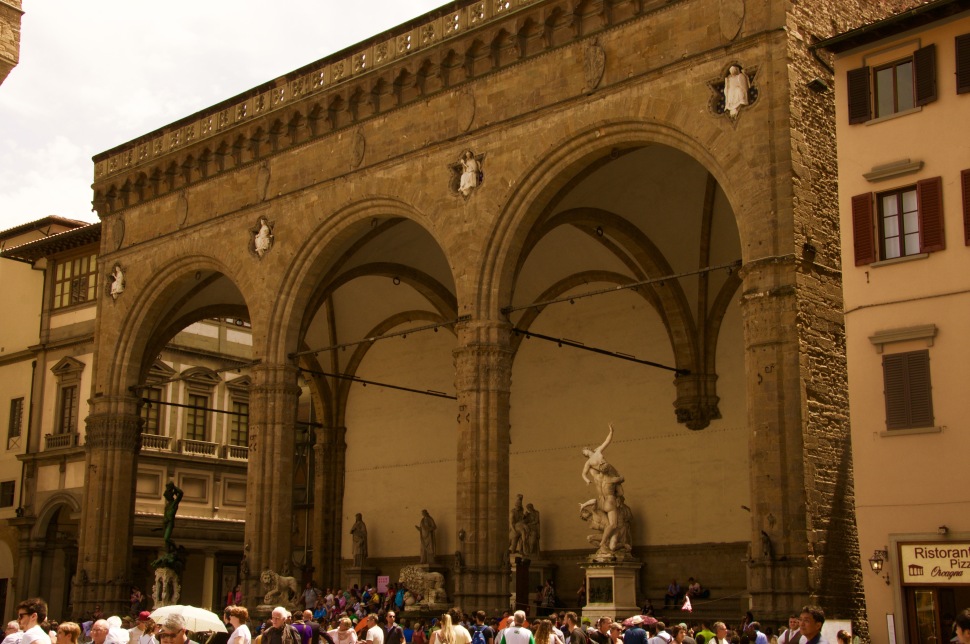 Right next to the Uffizy is Piazza della Signoria, an impressive square dominated by equally impressive buildings.  Above is the Logia dei Lanzi and the copy of the famous RAPE OF THE SABINE by Giamblogna.

A sampling of the varied buildings around the square. 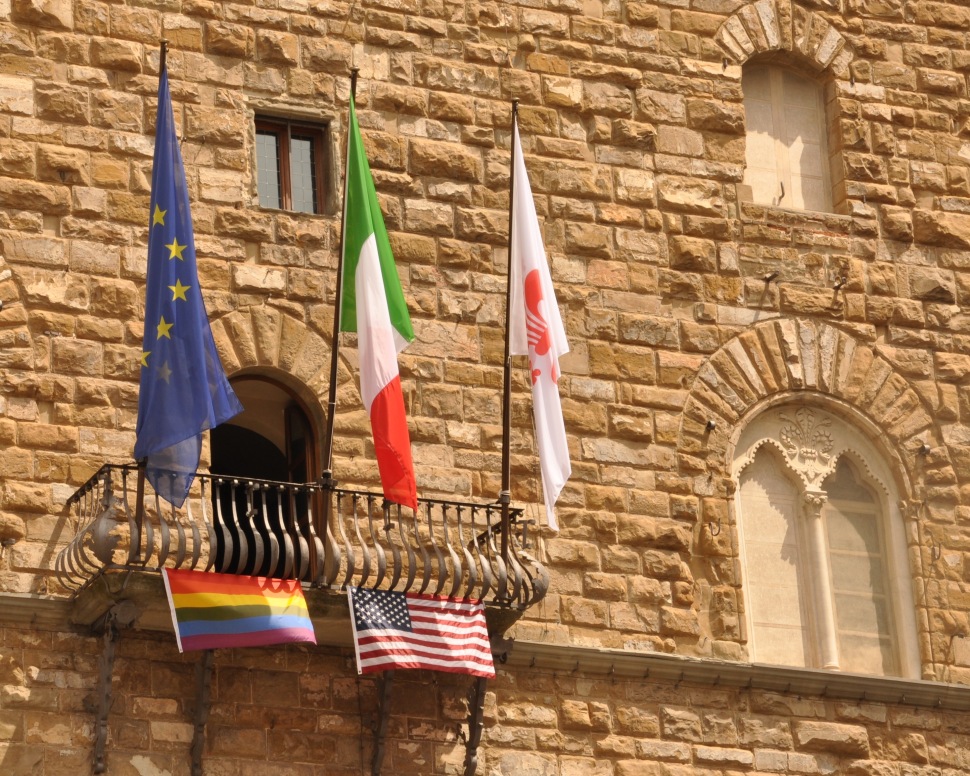 The night club massacre in Orlando had just occurred.

Then we made our way to the Duomo 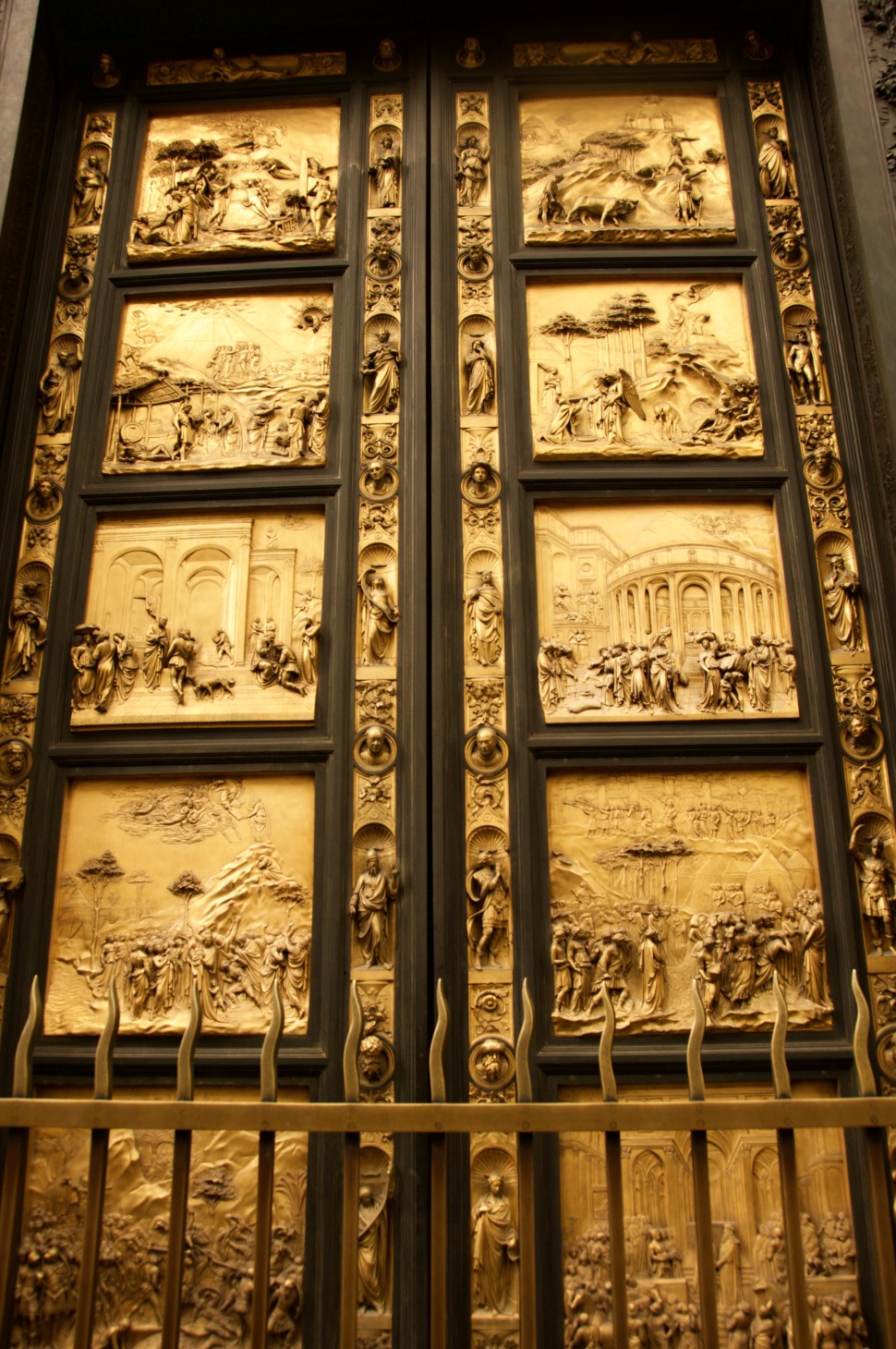 Replicas of Lorenzo Ghilberti’s GATES TO PARADISE (1403-1424).  This link explains each panel of the famous doors.

With so many people around the doors, it was hard to find a moment without a head in the way!

The exterior is exquisite.

Later, as we were leaving the city, we popped into a side door of the Duomo just as it was closing.  We were relieved to see that it was no where near as beautiful as the Cathedral in Siena. We had not missed anything by not visiting it.

The magnificent Gothic church of Santa Croce, where we didn’t have to wait to get tickets.

Buried here are some of Italy’s most famous citizens, 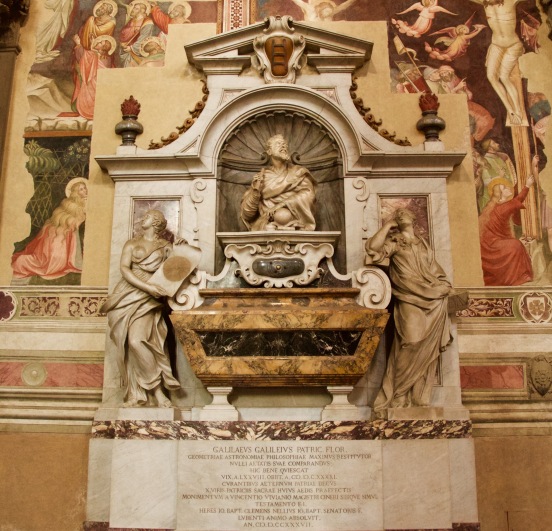 Here he is standing in the hall that was created to house him.

Michelangelo sculptured David’s head, arms and hands disproportionately larger than the rest of his body. Originally David was supposed to be displayed at the Duomo, where people would be looking up at him and from a distance.  Everything would then look proportionate.  He was so clever! 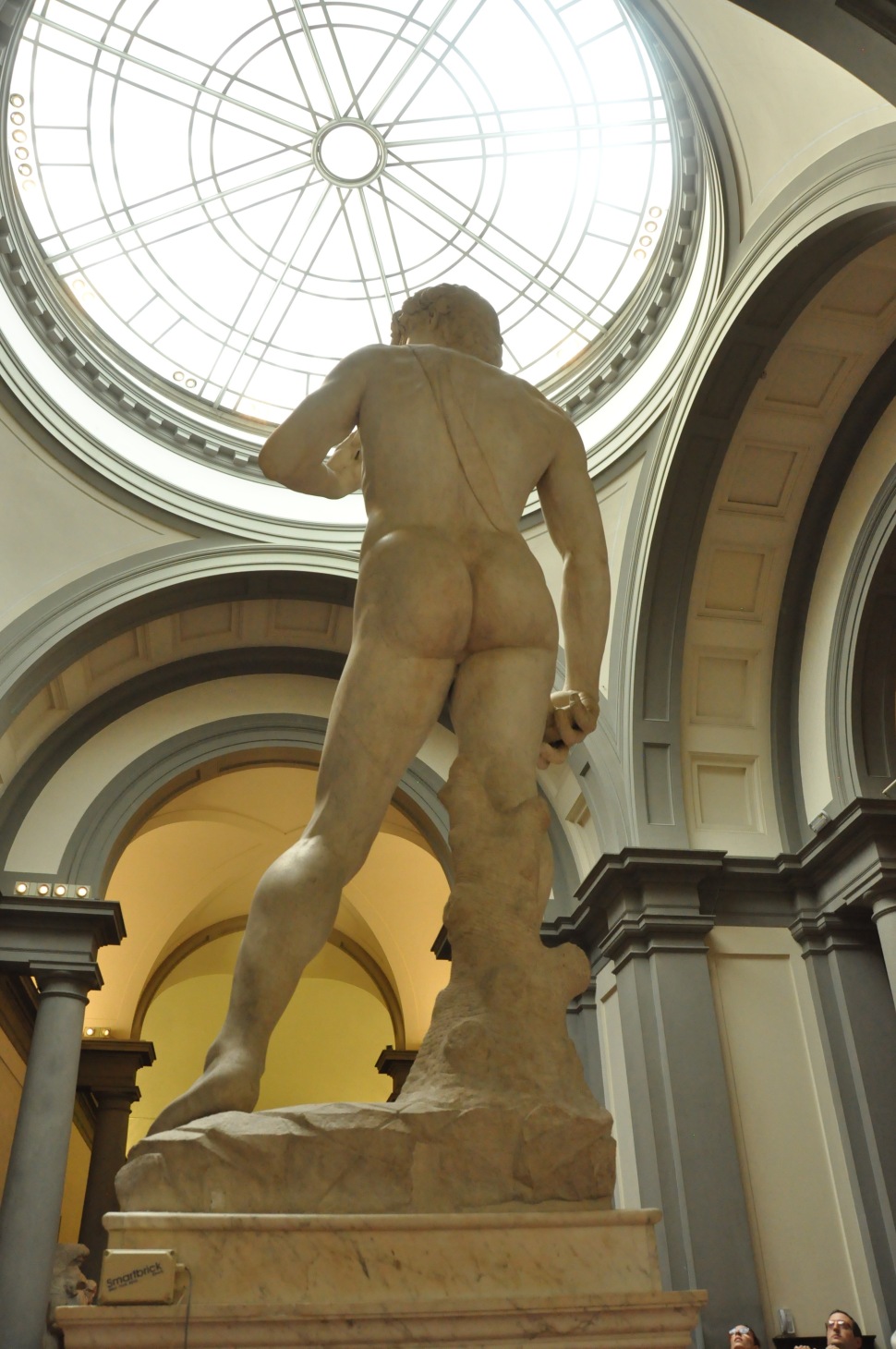 Behind the statue, there was a bench along the wall. There seemed to be a lot of women sitting there…..😊

I was so glad to have seen him; definitely more impressive than on paper!

And here is the real RAPE OF THE SABINE

We had seen all we could take in and the heat and humidity had sapped our energy.

interesting that for some, their cultural behaviors follow them around the world. 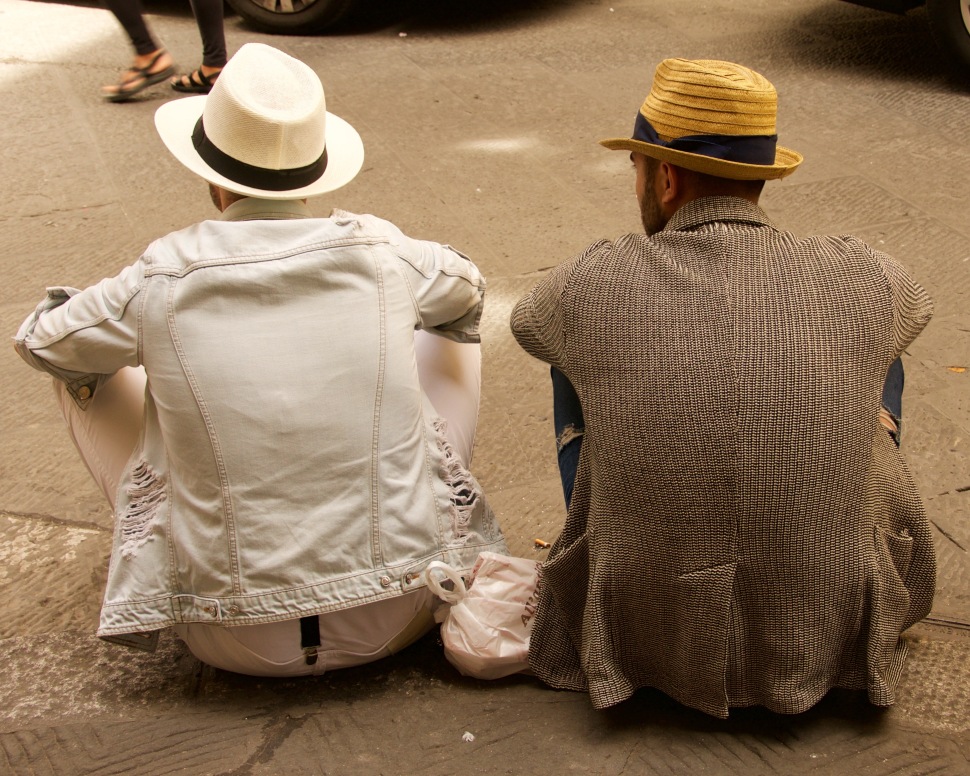 The Italians just know how to wear their clothes with such style! 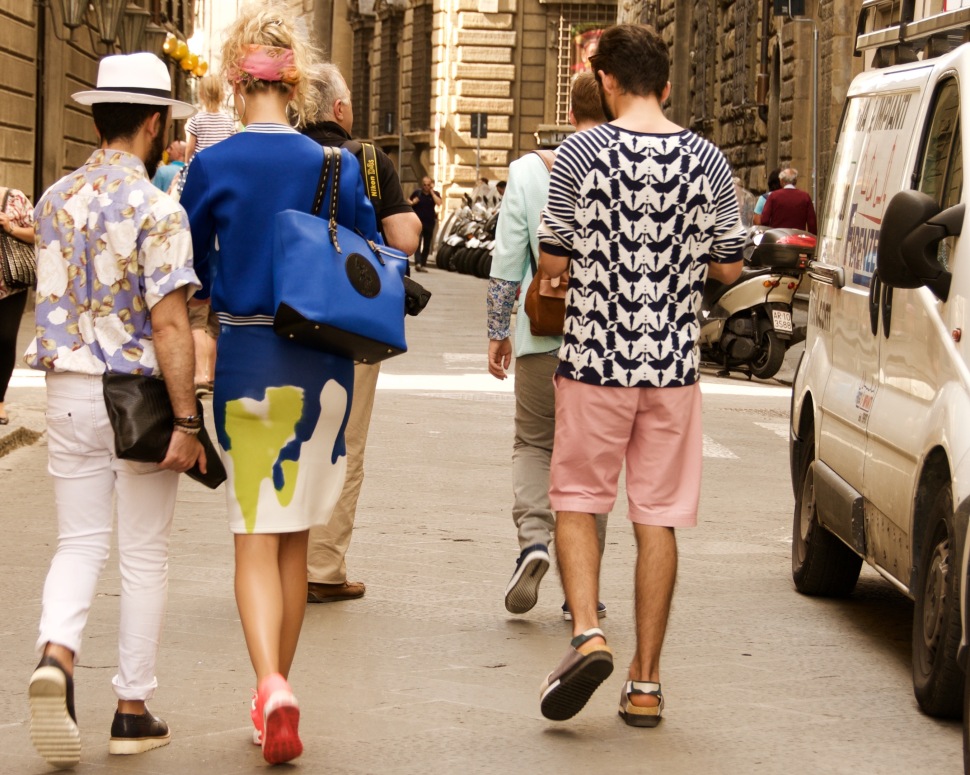 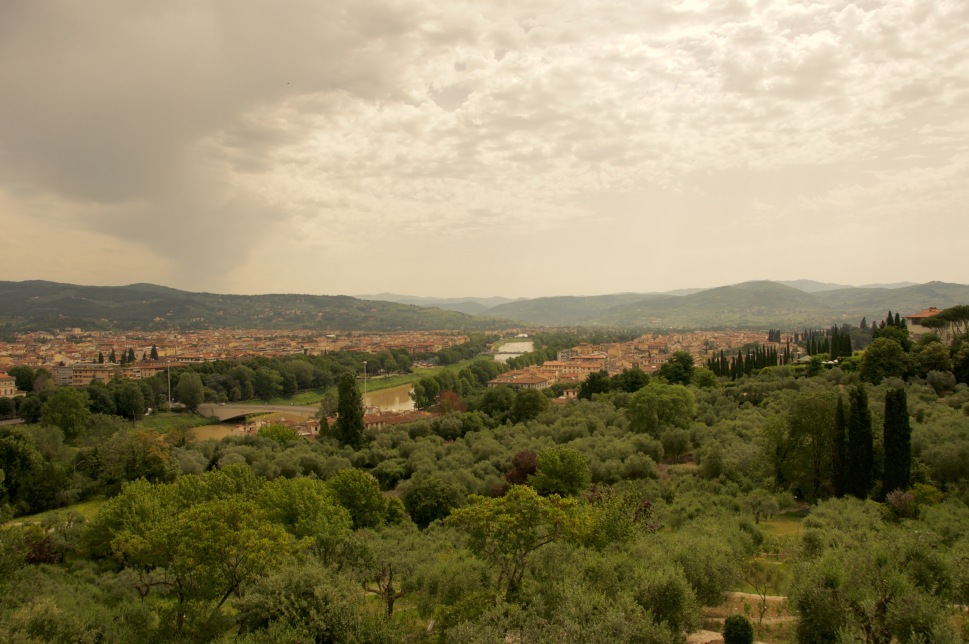 It looked as though we were returning to our car just in time before the rains set in to cool things off.

Next time we visit – we’ll book well in advance to visit the Uffuzi!

Next: Locarno and Milano