Our trip to Spain was planned to coincide with Easter.  I had seen pictures of some of those fascinating Catholic Easter Parades and really wanted to experience them.  Then I read about the Fallas Festival, which takes place in València every year.  Would it be possible to see both events in València?  Fallas was March 15-19 and Easter March 25-28, earlier than usual,  so yes, it would be possible to be there for both events!  Fantastic! 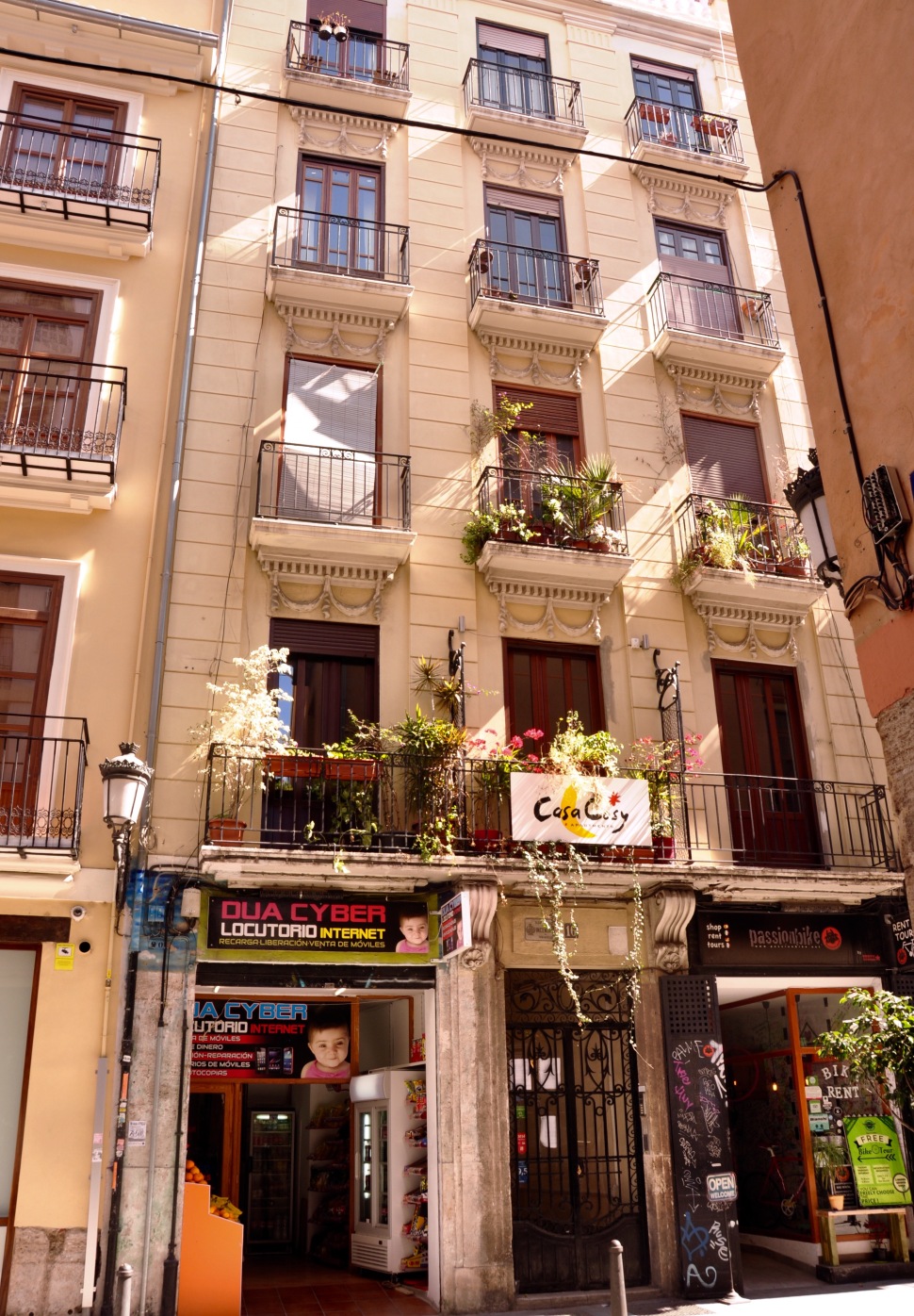 As we got out of the taxi in front of this building, I heard fire crackers going off!  I was a little alarmed.  “This is such a noisy area” I thought, as I also looked at the vast crowds of people.  “I’ve made a huge error in choosing this place!”  But what I didn’t appreciate until the next day, was that we were in the heart of the Old City, and of course, as I had planned, we were there in the middle of the Fallas Festival!  Over the next several days, we grew accustomed to hearing firecrackers going off day and night.

Our Airbnb apartment was not quite ready, so we went exploring.  Just around the corner

was this magnificent building, the Palacio de la Generalidad (which blends Renaissance, Gothic and Moorish styles). It is now used by some very fortunate government agency! I learned to love its architecture in any light. 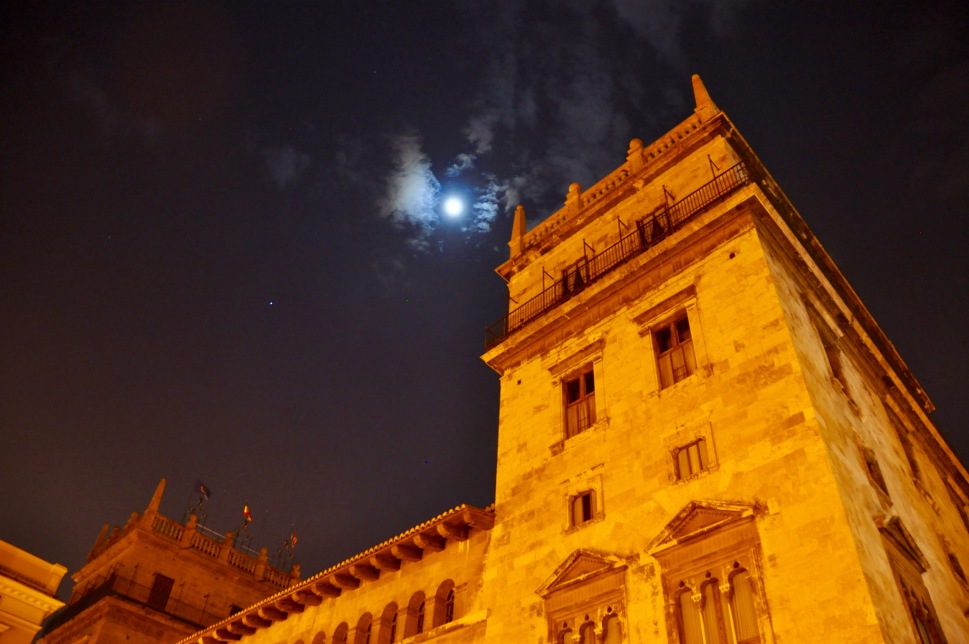 Also the Falleras  ended their parade through the city in front of this building!

Walking down besides the Palacio…….

………we found ourselves in  Plaza de la Virgen . It is dominated by the 17th century Basilica, the Cathedral and the Túria fountain. They form the heart of this pedestrian square, dotted with cafés.  Because of it’s proximity to our apartment, it also became our favorite place to hang out and people watch!

While eating at one of the cafés on the square that first afternoon, we found out to our delight that it was to play a central role in the Fallas Festival!  The Falleras over the next couple of days would decorate this wooden structure of the Virgin Mary with flowers.  And, the parade would be coming through around 2 pm – so we hurried back to the apartment to get settled and then returned to the square.

When we arrived back in the square, it was somewhat overwhelming;  I didn’t know in which direction to point my camera!  There were so many participants and the costumes were stunning!  The attention to detail showed how proud they were of the part they were playing. And I cannot imagine how much it must have cost a family to be outfitted like this!  I was partial to the children of course, but both the women and men had such gorgeous costumes!

And I was pleased to see both mothers and fathers involving their children in the experience. 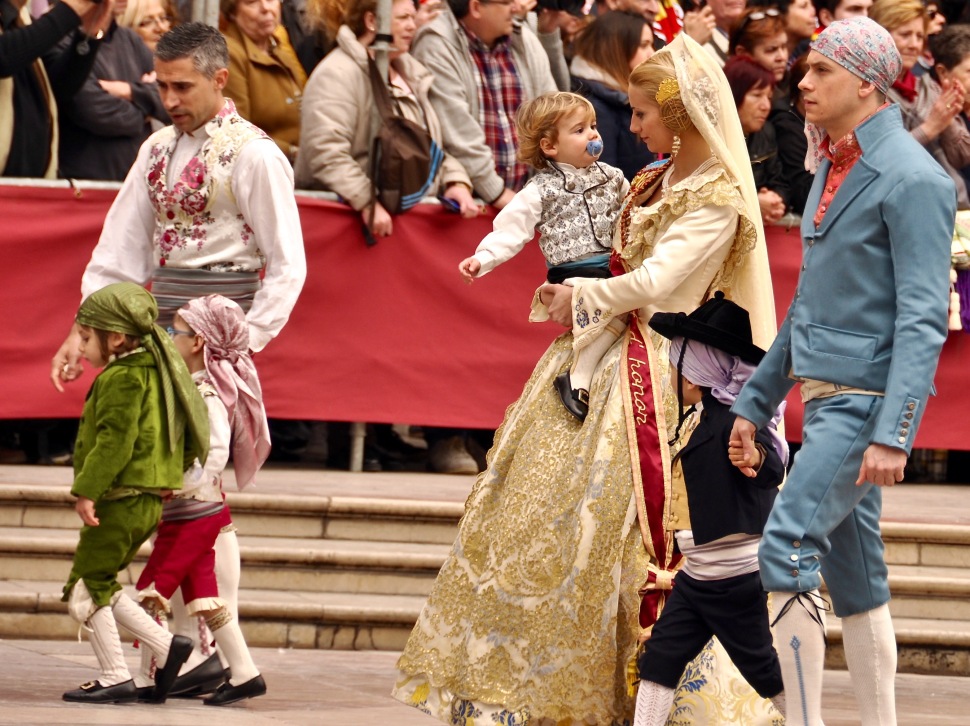 At times, the participants were quite emotional about the part they were playing – which endeared them to me even more!

That evening I went to bed thinking that I had seen all the Falleras and was ready to explore more of the Old City. 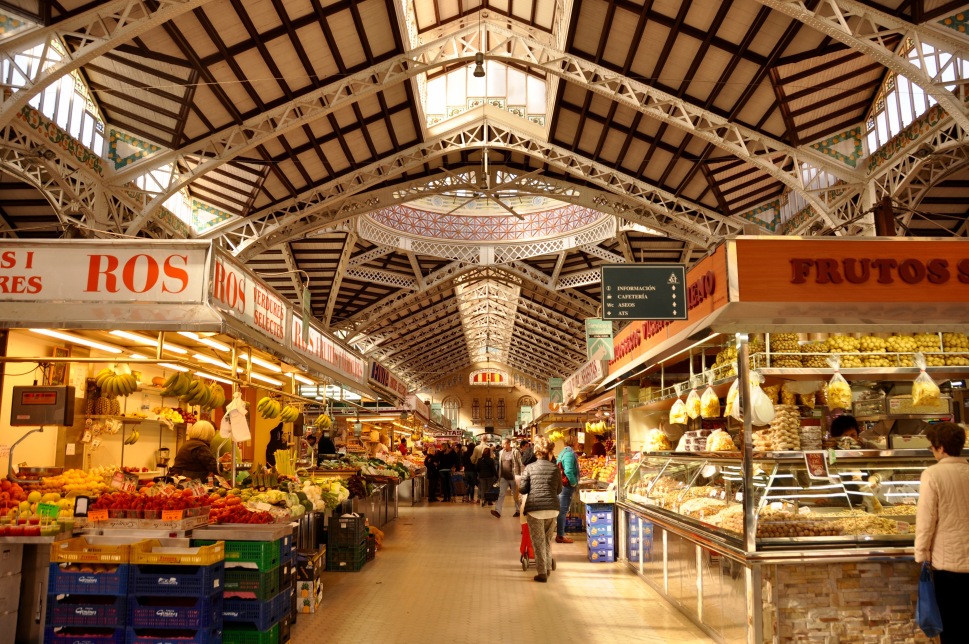 We needed to stock our little kitchen, so the next morning we headed to the Mercado.  Built in 1916, it now has around 1,300 stalls with any fresh item you might need.  Oh.. my.. goodness..! This became one of my most favorite places.  I actually wanted to go food shopping every day!  Normally I HATE grocery shopping!  But this was almost a religious experience (I can see Jouko rolling his eyes about now……….!) 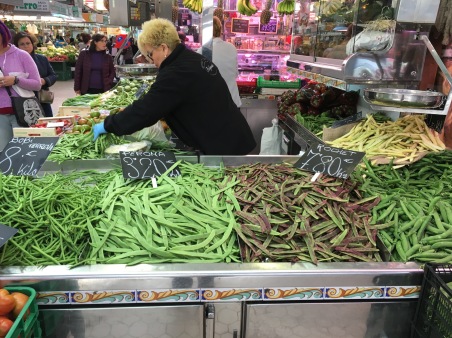 Mushrooms for that special recipe? 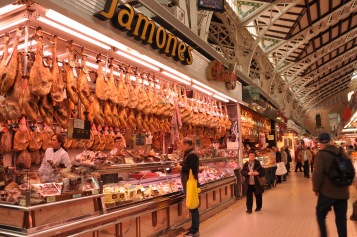 Just opposite the Mercado was this magnificent building, La Lonja, one of Europe’s most magnificent examples of late Gothic architecture.  In 1996 it was declared a UNESCO World Heritage Site.

To my amazement, the Fallera parades continued Friday afternoon and along with the Offering of the Flowers, the wooden structure of the Virgin Mary evolved into a work of art.  Here is the back of the “robe”. 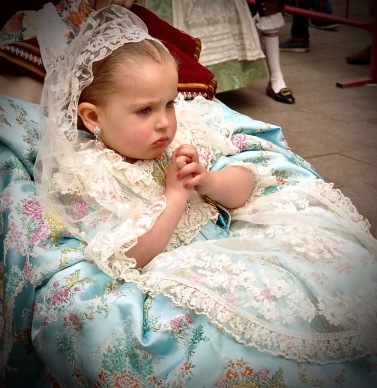 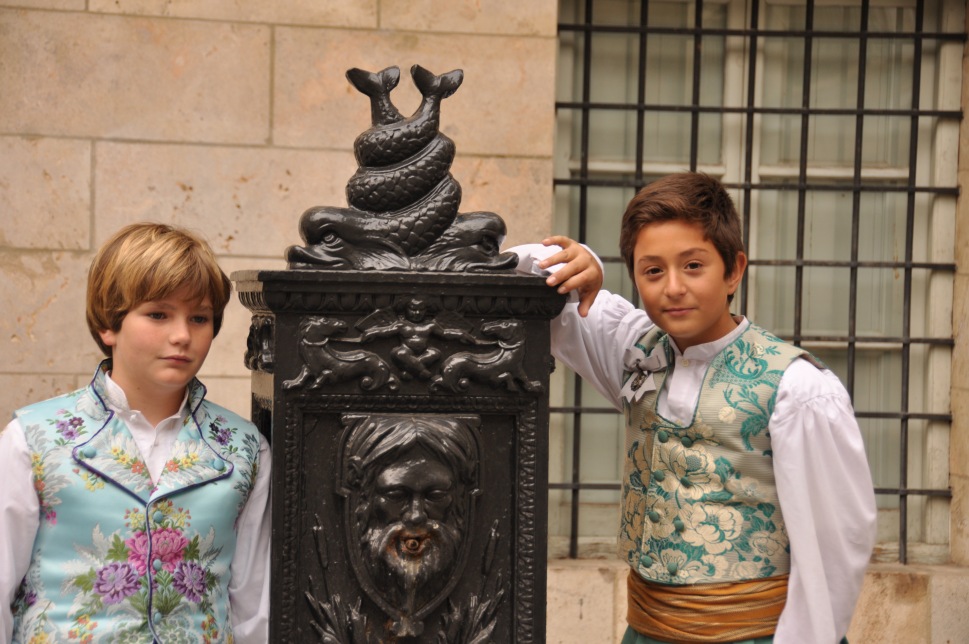 That evening was to be the big firework show – and as with everything in Spain, which comes alive at night, it would not start until 0100!  So we went back to our apartment to put our feet up! 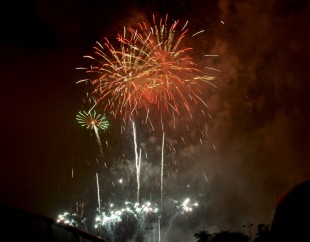 We set out at least an hour ahead to ensure a good spot and found ourselves shoulder to shoulder with thousands of Spaniards and many, many tourists (no possibility to set up a tripod, even if I had had one!).  Alcohol was flowing freely, but the crowd was so well behaved.  It was one of the most spectacular firework shows we have ever seen and seemed to go on forever!  And when it was time to turn around and return home, we found ourselves compressed chest-to-chest, shoulder-to-shoulder with perfect strangers – but no one forgot their manners! 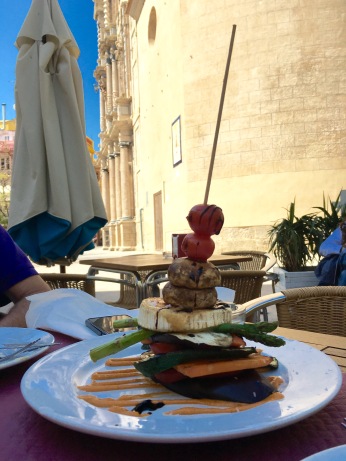 This quiet square is where we enjoyed some of the best Tapas! 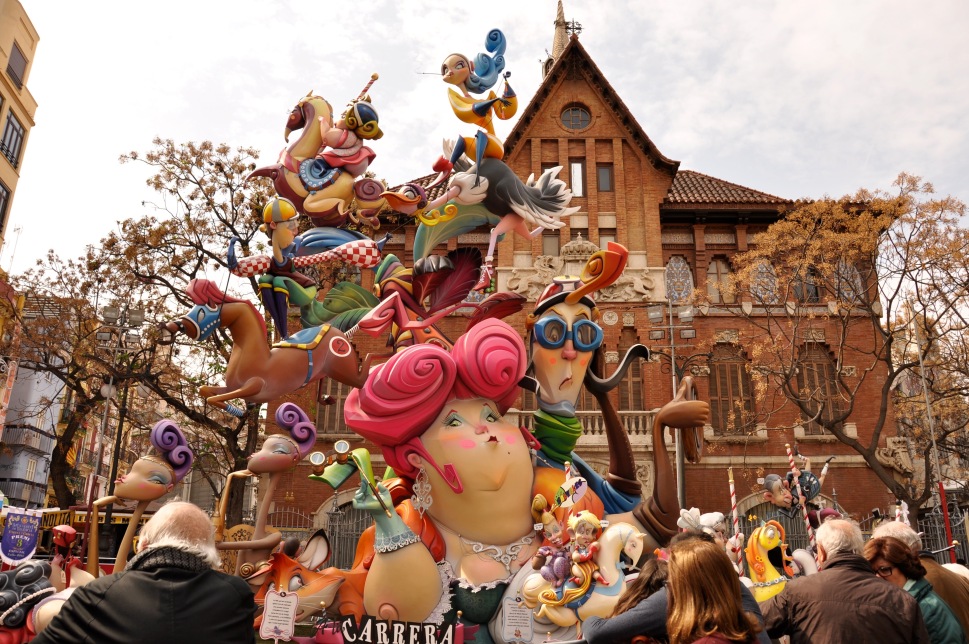 The Festival comes to a climactic and pyrotechnic end Saturday night, with La Crèma – The Burning!  They build these Ninots – papier mâché  monuments, which are then set afire to another round of music and fireworks.  They usually have a cynical message regarding some figure in the public eye. 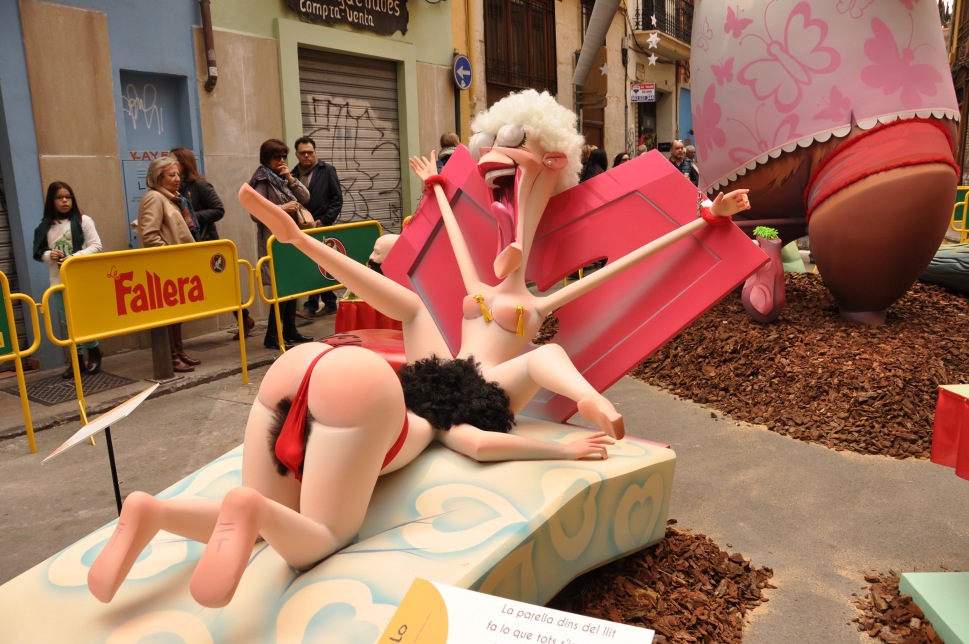 But some are downright shocking!

Each area of town chooses it’s subject and then builds it’s own Ninot, in a square surrounded by buildings!  And they are then all set alight at the same time, around 1 am.  From the sky it must look as though Valéncia is burning! 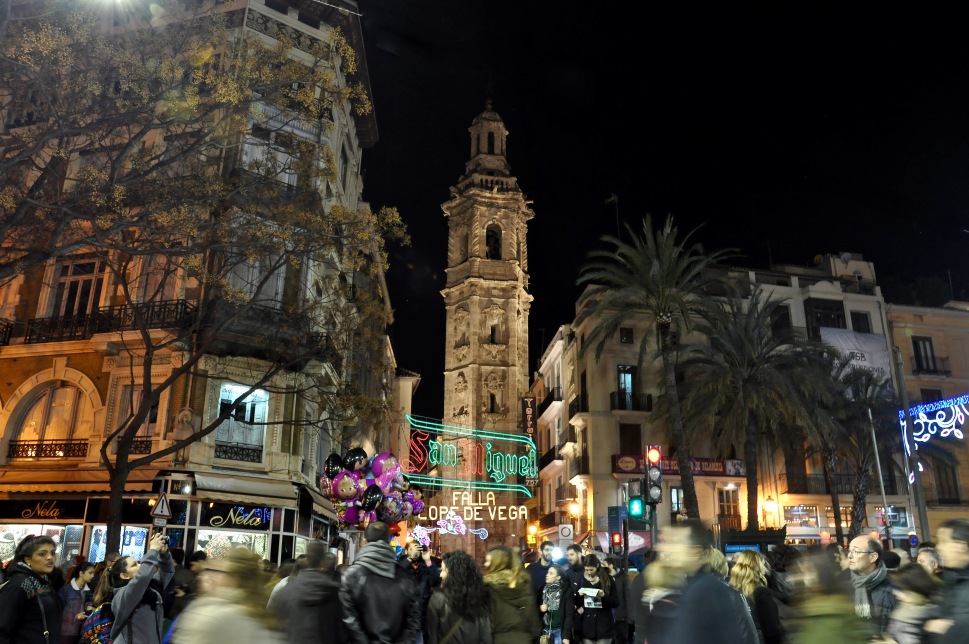 Since Jouko did not want to deal with the crowds again, I ventured out on my own. It was almost like Christmas with the colourful street decorations!  Wanting to get a good spot, I left early,  but the crowds were already dense. 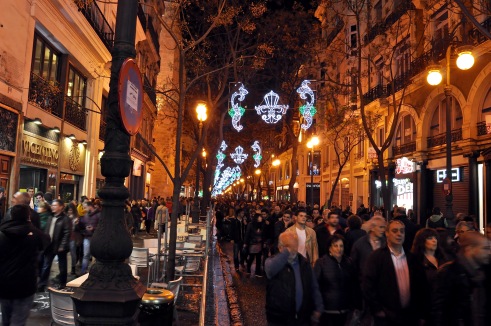 The only spot I could find was at the back of the Ninot, which seemed to represent an ancient Greek god. There was also an Eiffel Tower, some other smaller statuary and the Concord!  Unfortunately I wasn’t able to read the inscription of what it was all meant to represent.

Eventually 1 am rolled around.  Over the loud speaker came a beautiful voice (perhaps Mario Lanza?) singing “València”!  Then more fireworks before the slow and quite peaceful burning of the Ninot. The crowd was hushed as everyone observed – before slowly starting to dissipate…………

The return back to the apartment took a while; once again, every one was civil, but it certainly was an “intimate” experience!

Now that the festival was over, we had time to explore the city. 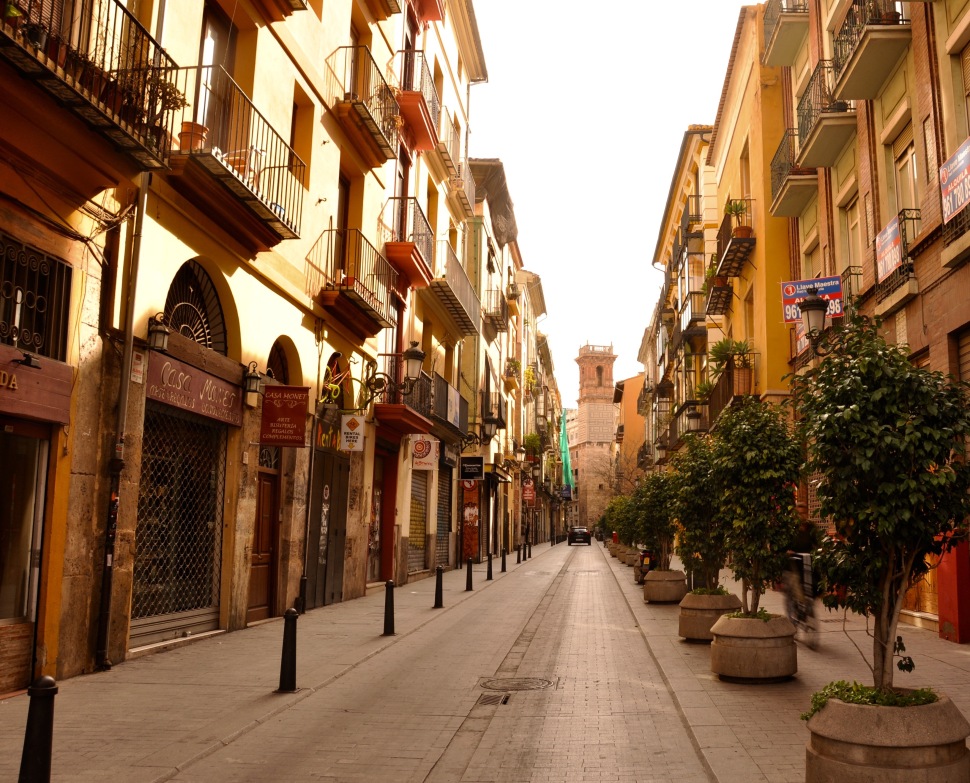 The following morning our street was VERY quiet!

Climbing the tower at the other end of the street, we can see the tower from the previous picture! 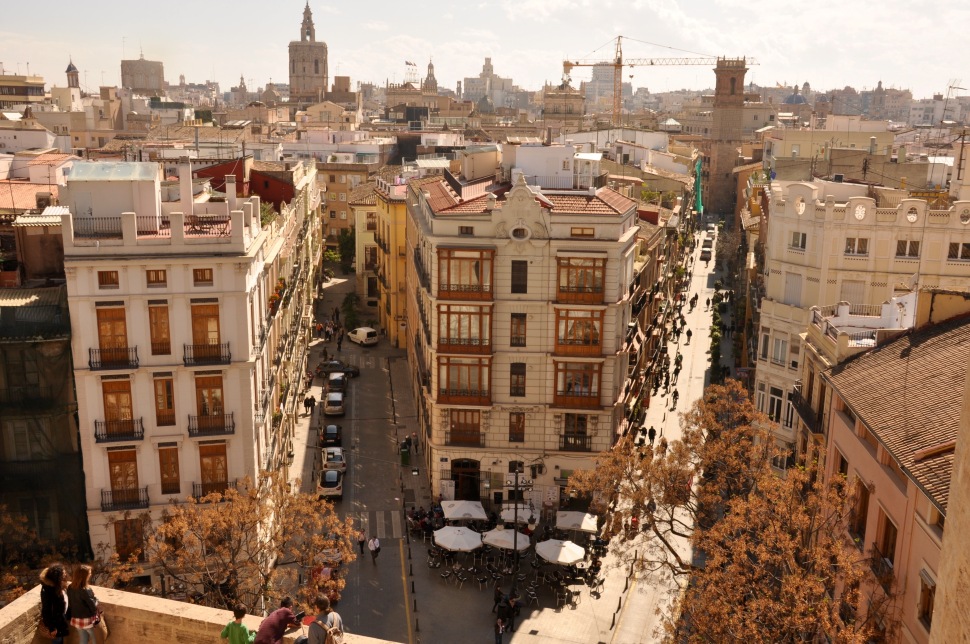 And here we are looking down onto our street on the right. 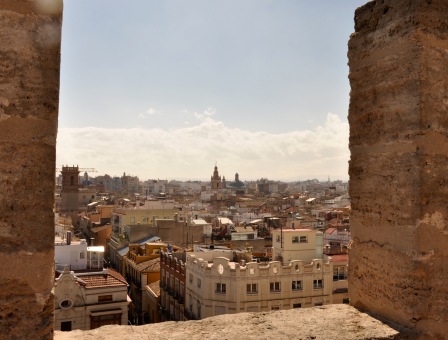 Two views of the city. 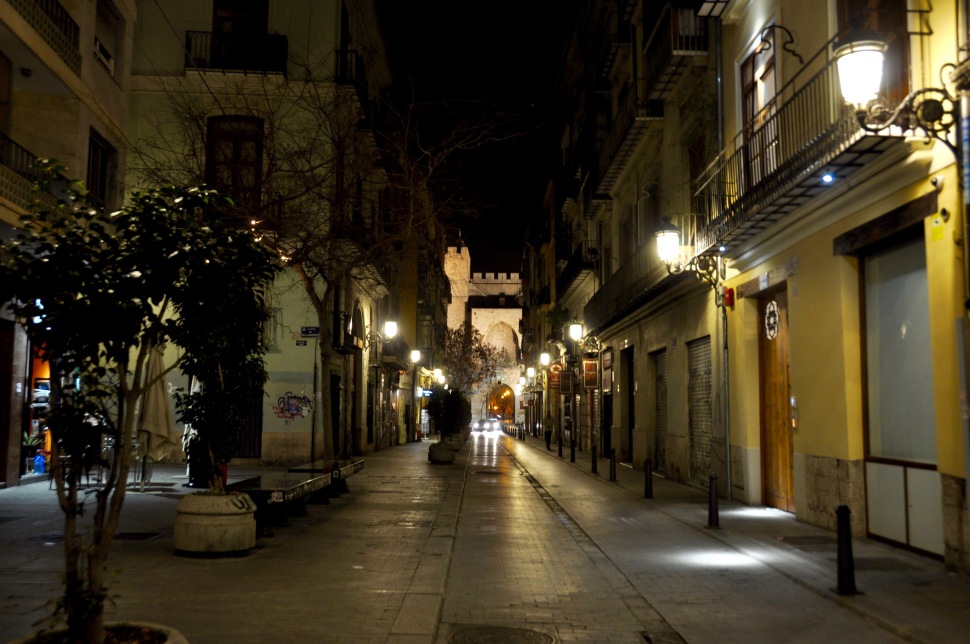 A night shot of the tower we climbed. 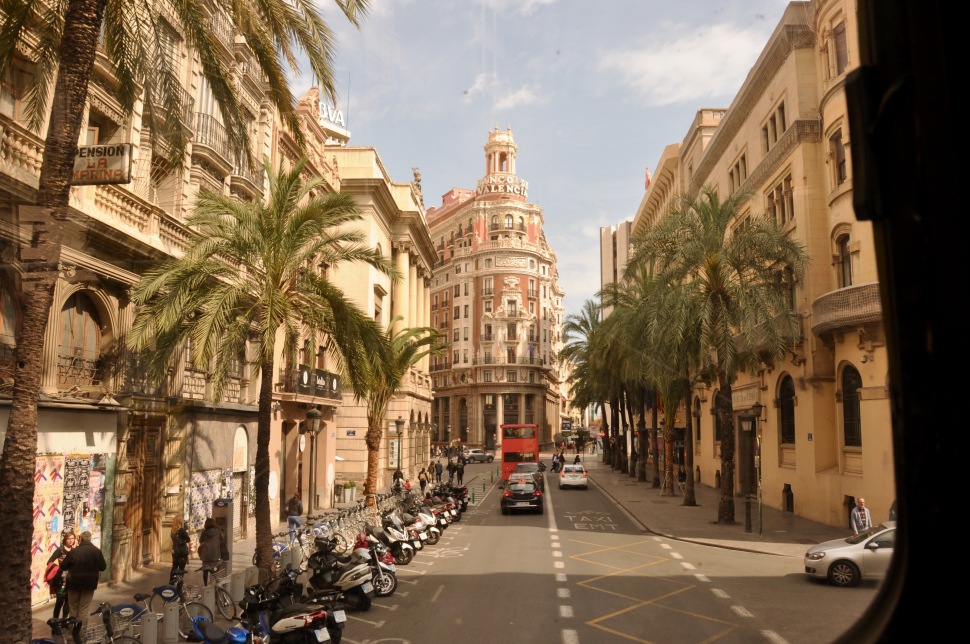 Another day we took a bus tour through the city and down to the ocean, seeing more magnificent architecture on the way, both ancient and modern. 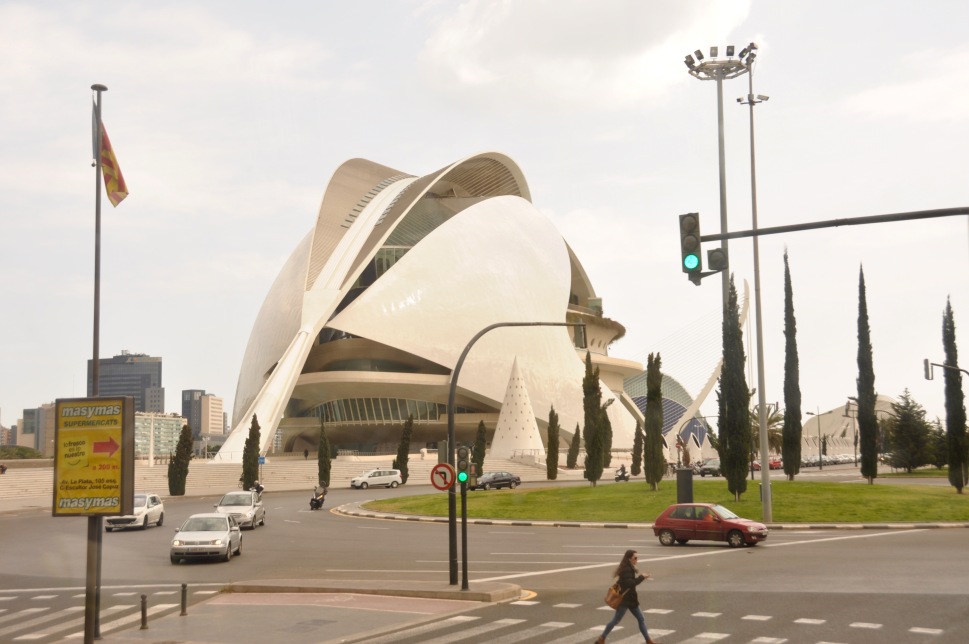 The beach was wide and  impressive, with beautifully soft sand. 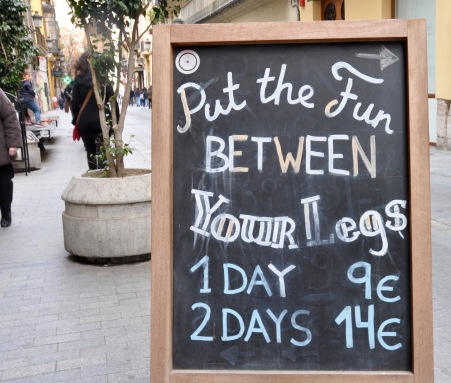 This bicycle shop was right outside our apartment and so one day we decided to give it a try.

The Túria park is a dried up river bed, now a sunken garden that runs through the city.  In 1957 the river flooded the city and they decided to redirect it’s path away from the center.  At any time of day or night, it is brimming with families playing, bikers and joggers.  There are football fields, tennis courts and picnic areas. 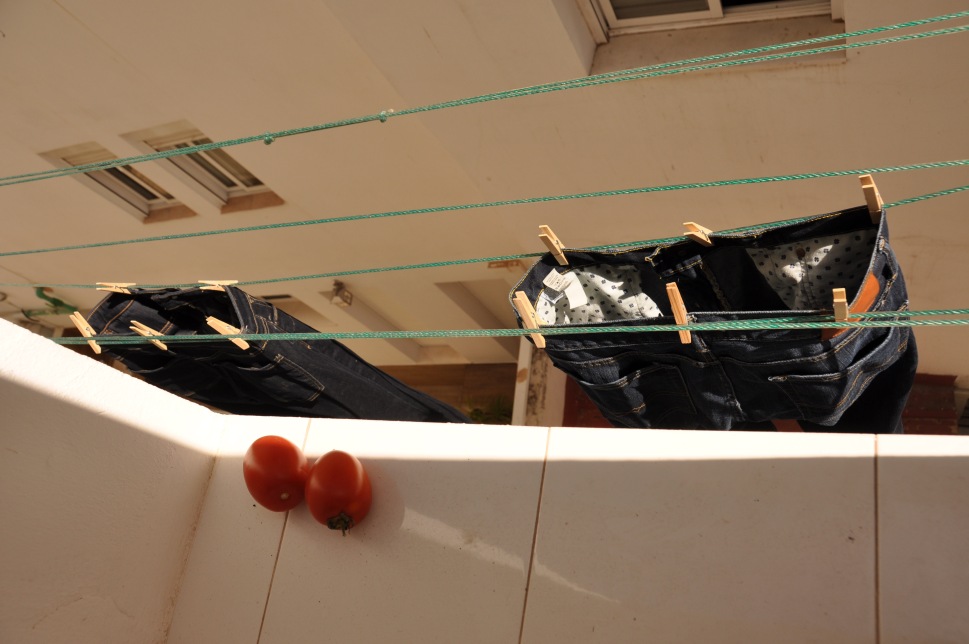 In between, we learned to to dry our laundry southern European style!

And enjoyed our modern little apartment.

Here is the front of the statue, fully decorated and smelling wonderful! 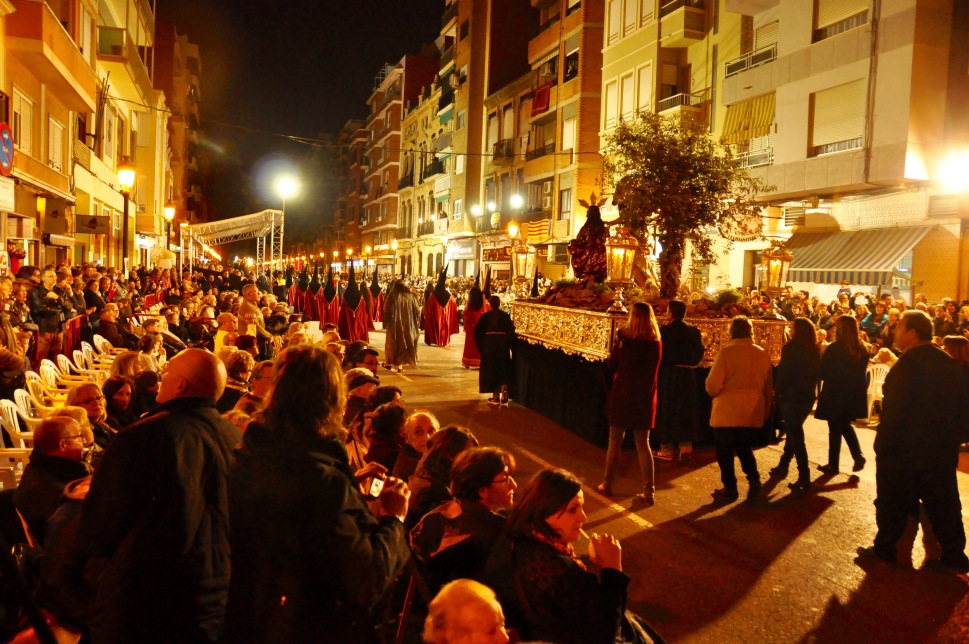 The Thursday evening of Holy Week, we made sure that we arrived at the parade site early so as to get a good seat (as it turned out we were 2 hrs too early!). 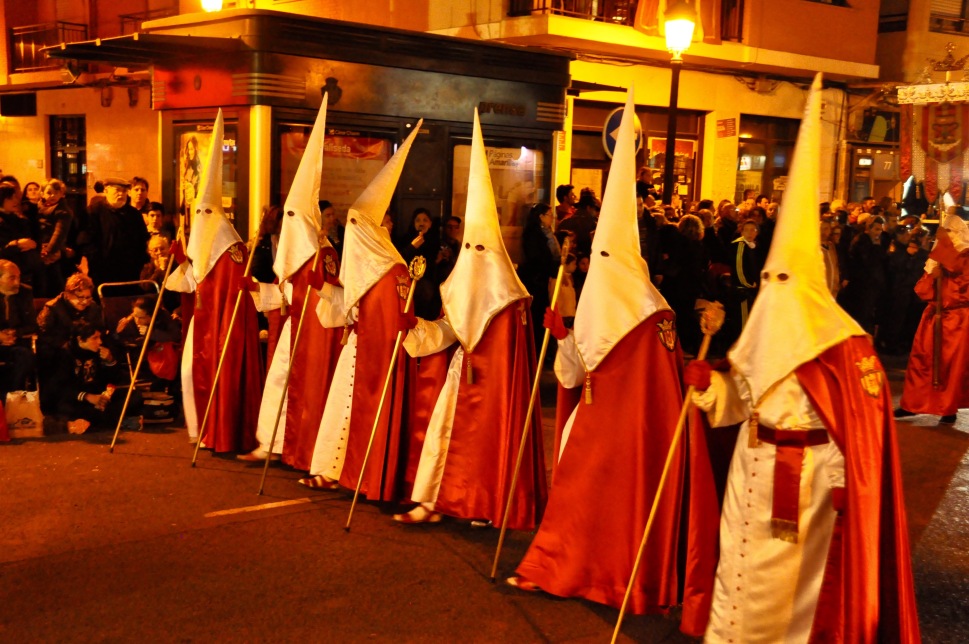 (Is this where the KKK got the idea of white hoods?) 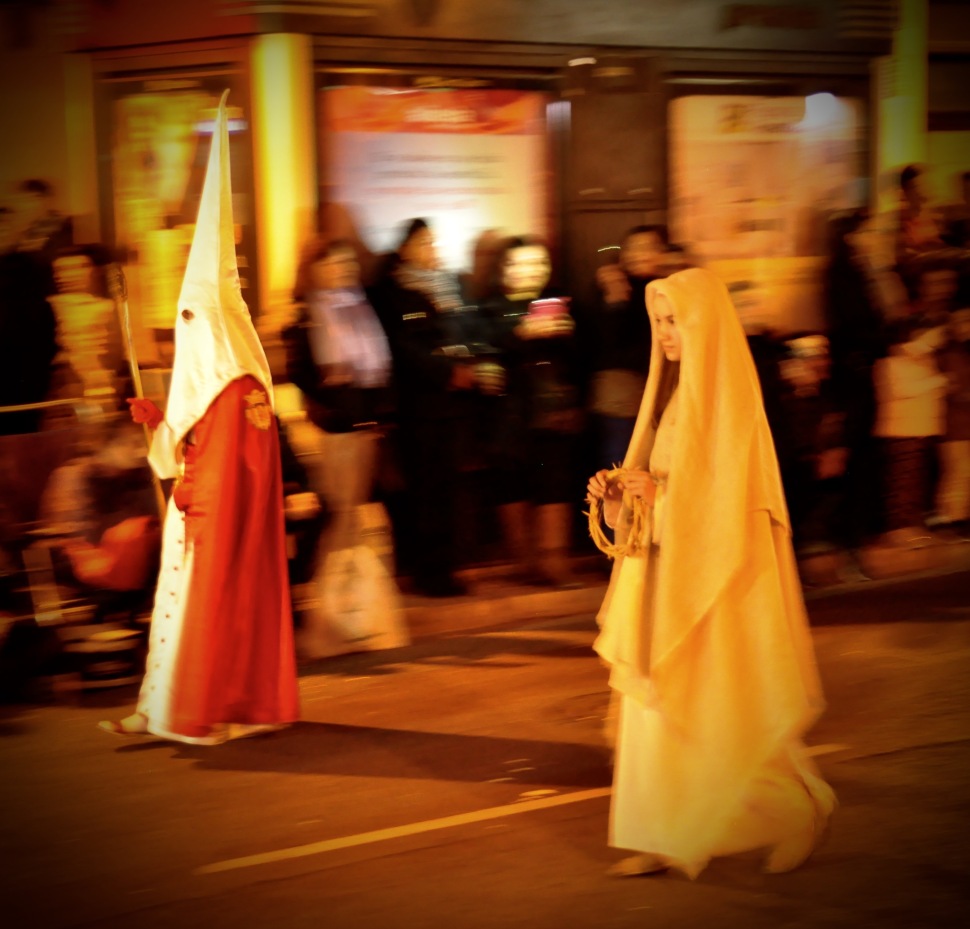 It seemed to go on forever!  After observing wave after wave of hooded people and other characters, we felt that we had seen enough and left early, avoiding the crowds.

Church bells woke us up Easter Sunday morning and I was able to observe some of the mass. 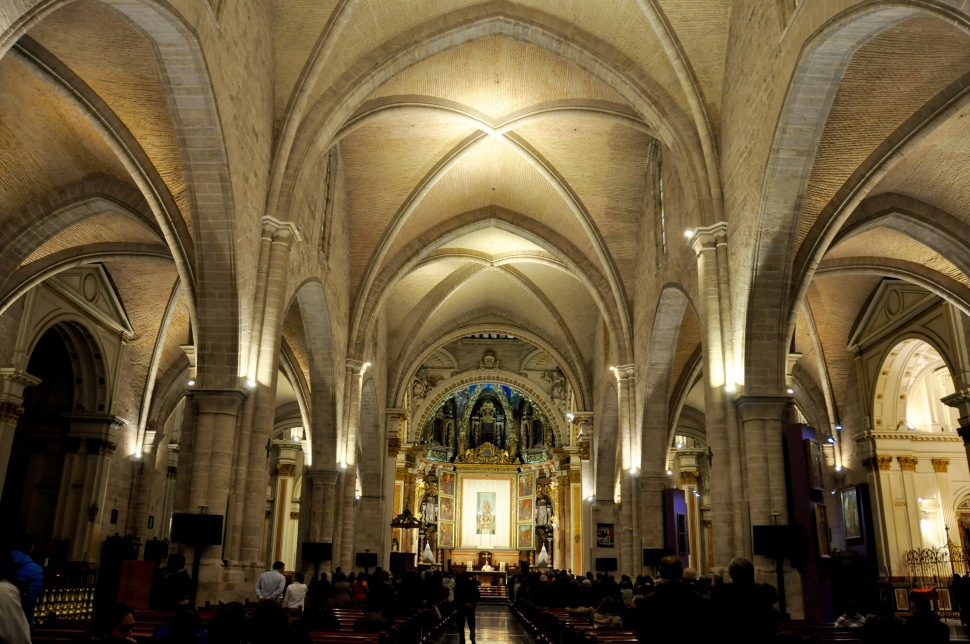 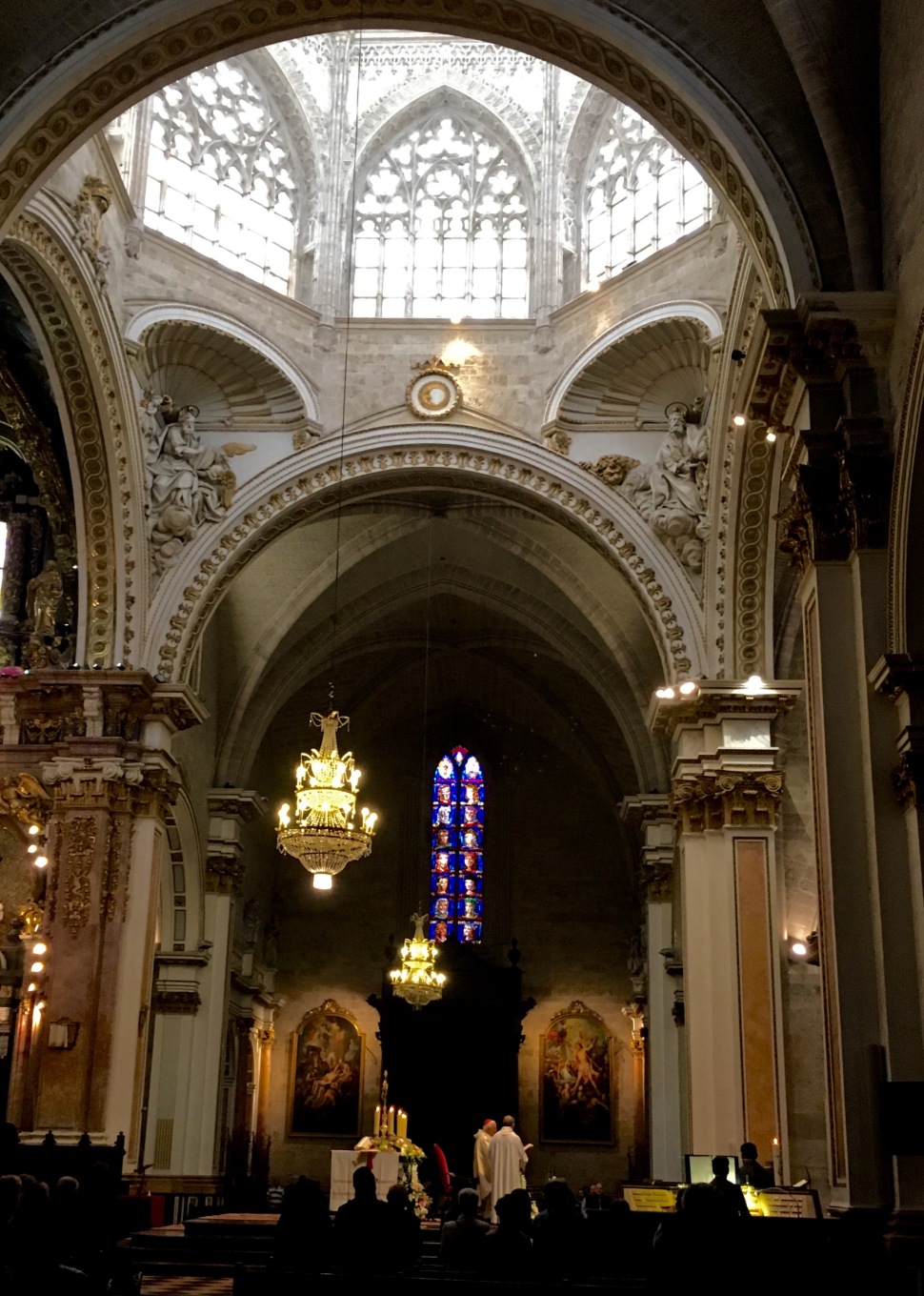 Our stay in València was drawing to an end.  It was time to say farewell to our favorite café and the graffiti laden alley-ways……. 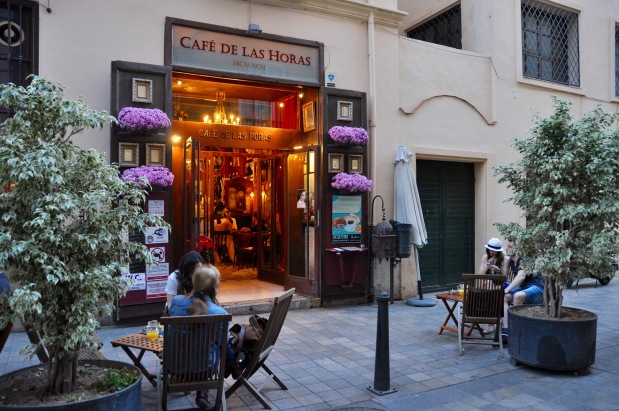 …….and to head south to Frigiliana!