Although the title suggests otherwise, as I write we are already in Valencia.  Jet lag, travel  to Valencia, attending the festivities and at times a slow WiFi connection, have all served to keep me from blogging, but I’m back and would like to give you a glimpse of our activities since my last blog!

By the way, I would also like to point out, that if you do not click on the underlined “thetwoboomersabroad”, the post will not pop up into the larger format, with the larger photos.

The 5 weeks between our return from Florida and leaving for Spain sped by.  The days were filled with making the round of Doctor’s appointments, filing taxes and needing last minute Dental care (which Niklas helped us with).  My main challenge was making sure that I could organize a continuous supply of the medications I will need.  Jouko made sure that the business side of things was up to date and copies made of important documents, etc. Finally it was time to move the rest of our belongings into storage.  Jouko’s cousin offered to look after our car, so we accepted that gracious offer.

That last weekend before our departure was beautiful.  Sabbath afternoon we enjoyed a walk with Nick along the Trinity River in downtown Fort Worth.

Since we no longer had a car and Nick was at work, we decided to give UBER a try; the ride to the airport was at least half the price of a taxi and we enjoyed the conversation with the retired gentlemen who drove us in his new Nissan Altima!

The flight was uneventful (that is always good, isn’t it!) and as we flew over northern Spain, in the early morning light I caught a glimpse of some of the snow-capped mountains, 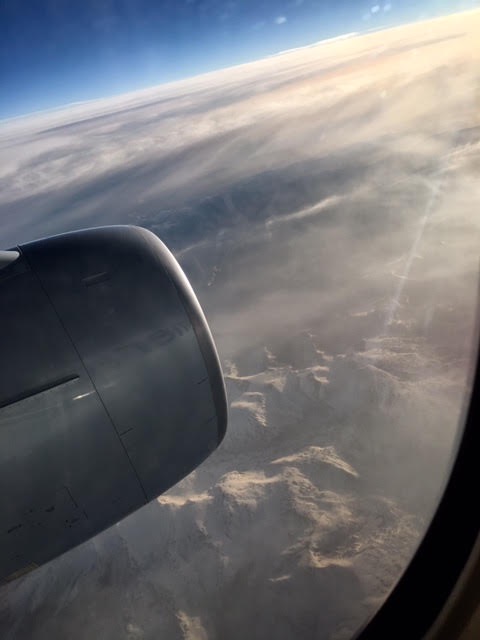 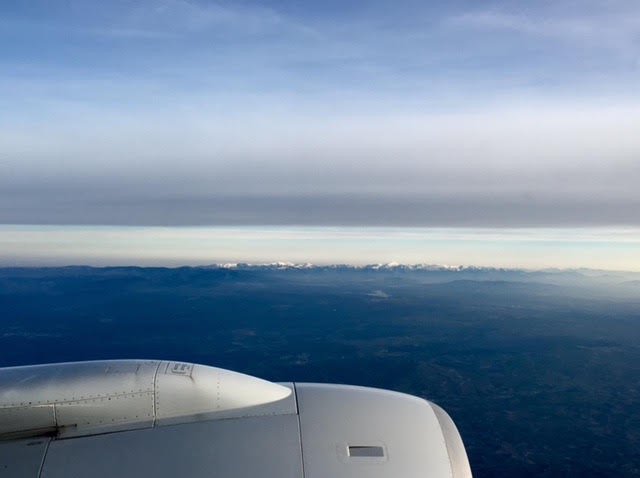 which receded into the distance as we approached the Madrid airport.

After settling into our hotel, we ventured out into the city, determined to stay awake for as long as possible!

Jouko had chosen the hotel for it’s economical price and also it’s proximity to both the Old City and the Madrid Railway Station.  So we quickly found ourselves among the narrow streets and beautiful, graceful Spanish architecture 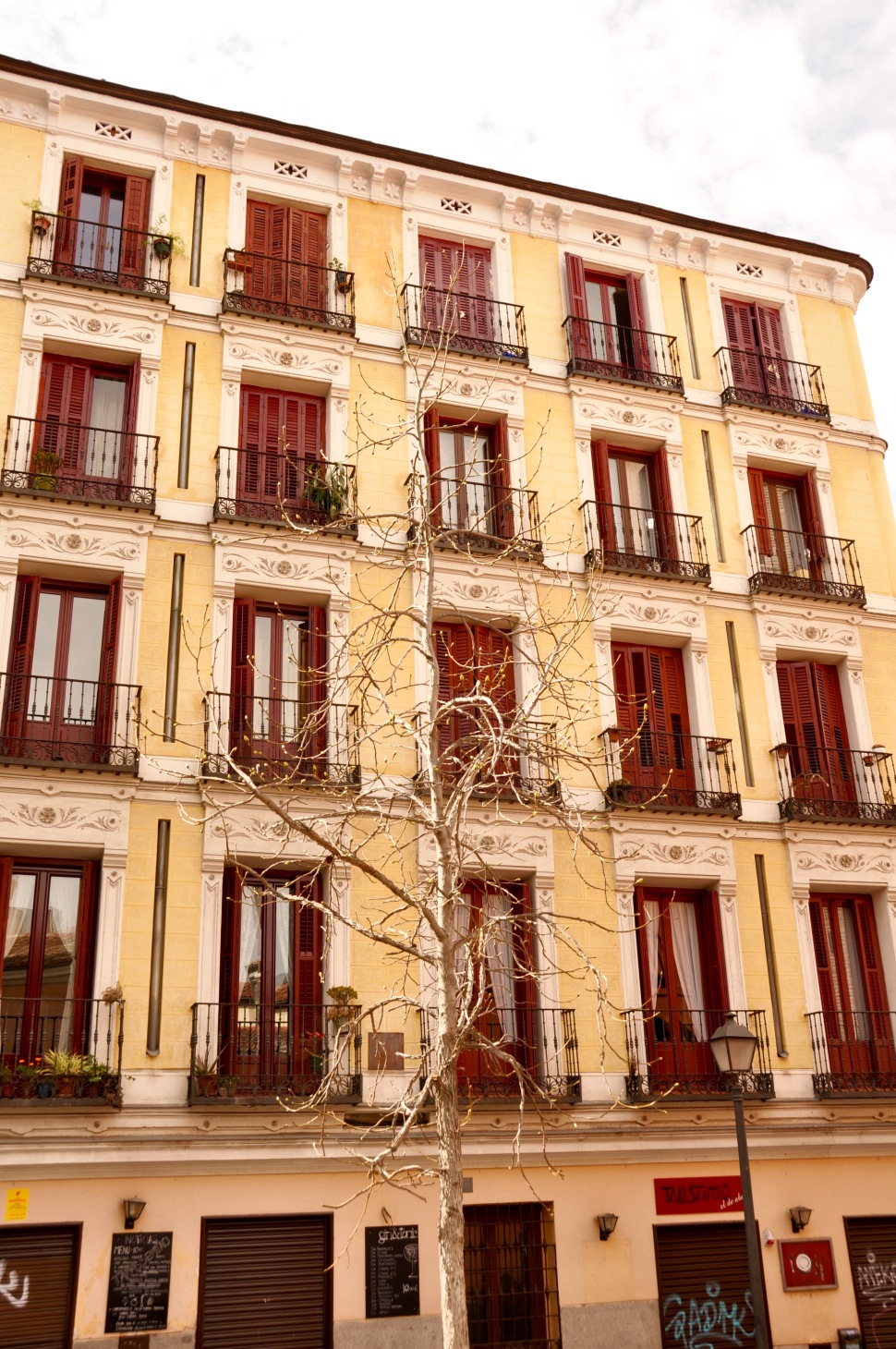 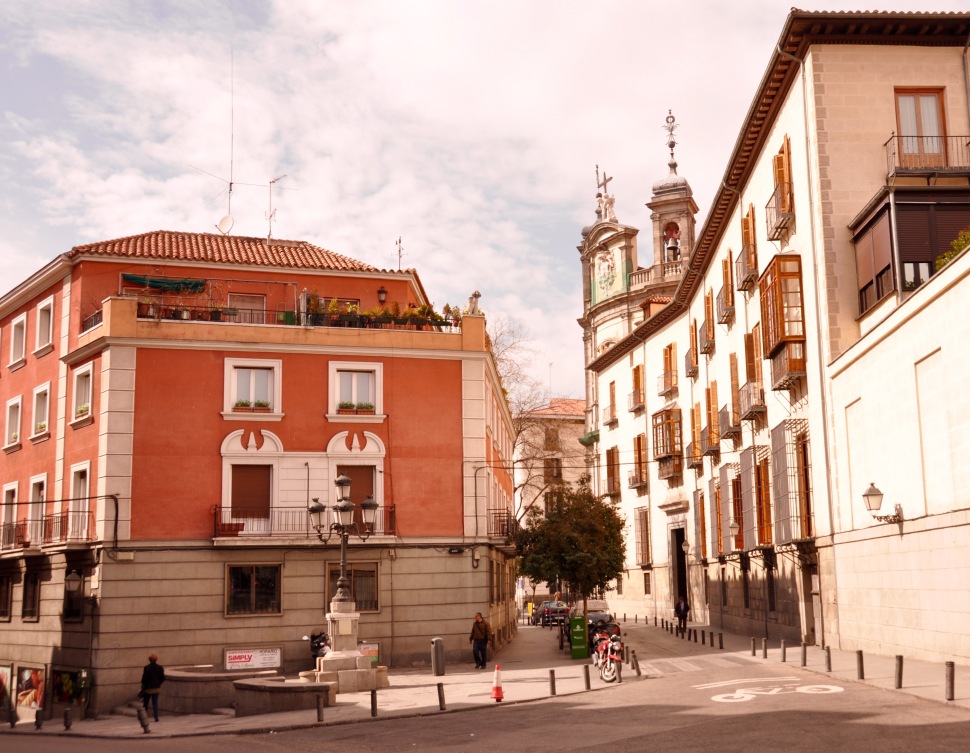 The buildings were often adorned with tile work, paintings or graffiti.  We enjoyed the 1st two!

By about 4pm we had wondered around without getting too lost and were starting to feel that we couldn’t take another step, so we headed back to the hotel.  Thanks to some exuberant youth next door, I didn’t sleep as soundly as I would have liked, but as we have started to remind each other, “this is all part of the adventure”! 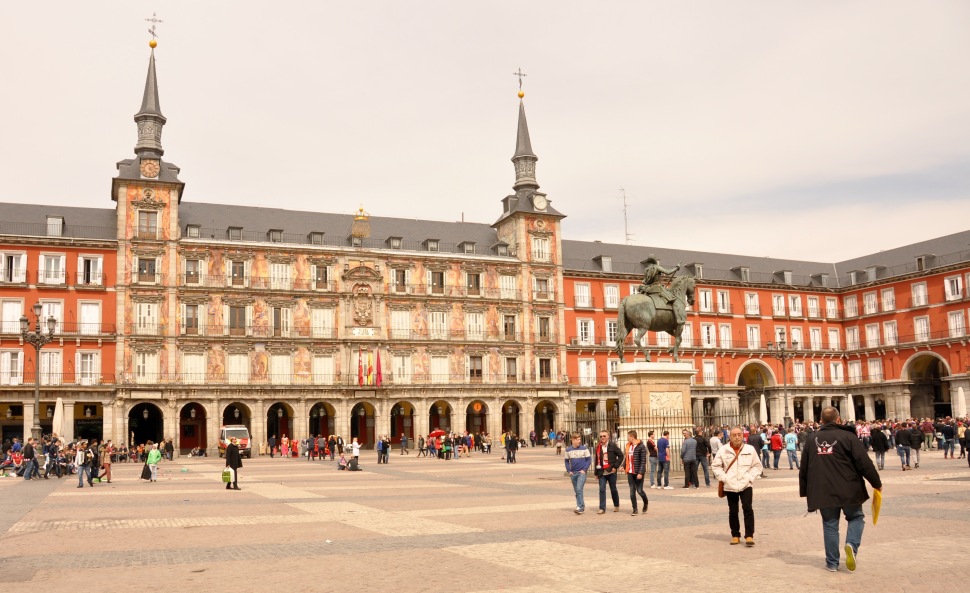 The next day, in beautiful sunshine and with clearer heads, we made a plan and headed for the center of the city, Plaza Mayor,a beautiful example of 16th century  architecture. 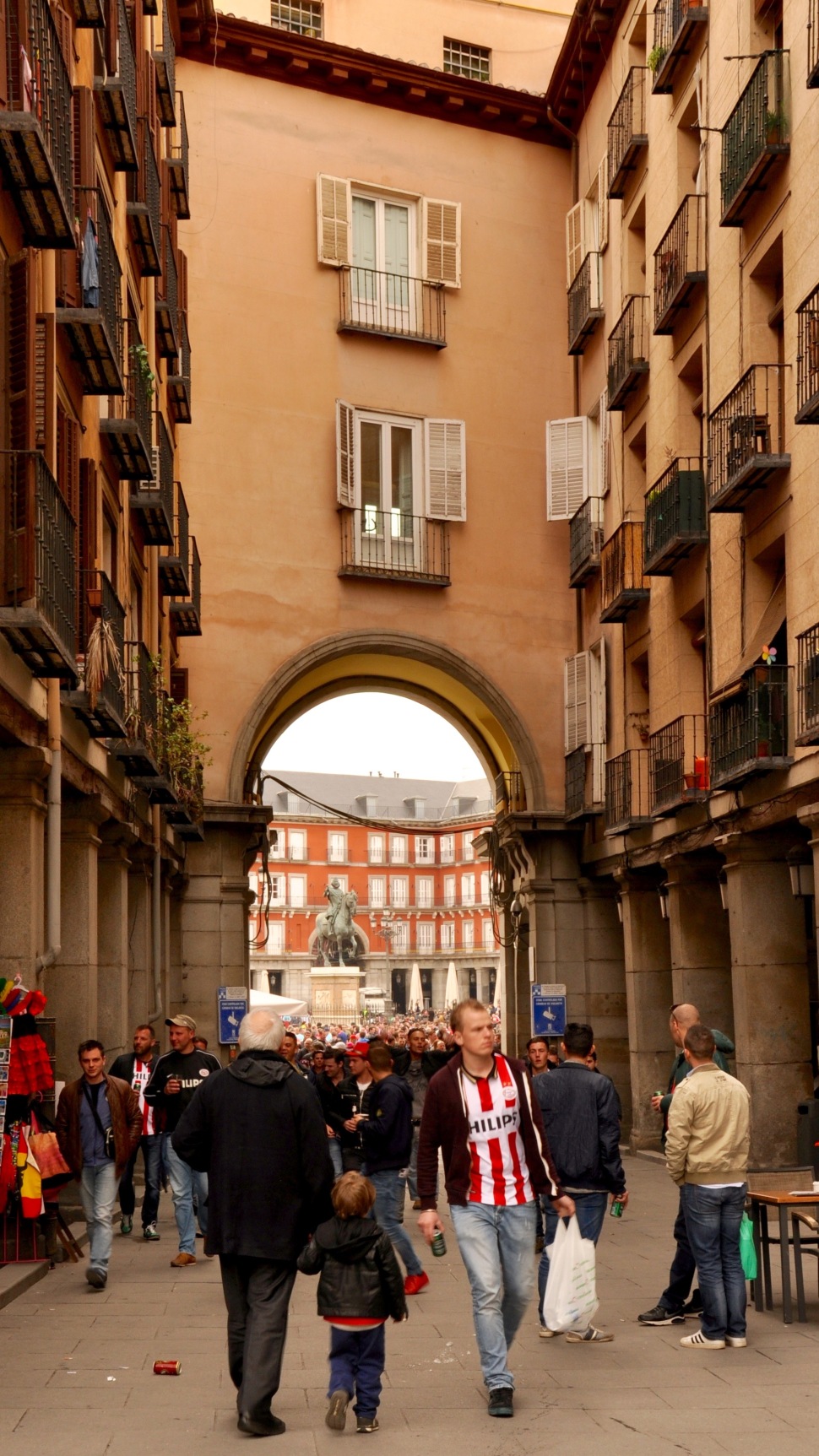 On arrival we noticed that something was going on; there were crowds of young, slightly inebriated young men gathered around some gypsy women. There was a police presence, but they just stood back and observed, ready to intervene if necessary. (We observed this same approach later in Valencia – they allowed the crowds their freedom, but always at the ready if needed)

It turned out that these Dutch fans were in town for a football (soccer) match and were entertaining themselves by making these Gypsys “perform”.  Initially we were horrified, but then saw that the women were laughing and enjoyed doing whatever the guys asked them to do for a few coins being thrown their way.

Here, they were asked to bow down, which they did willingly – and the 4th one comes up from behind and pushes the middle one flat on the ground!  We had observed enough………so moved on to see something a little more uplifting!

On exiting the Plaza, the curves of the buildings, 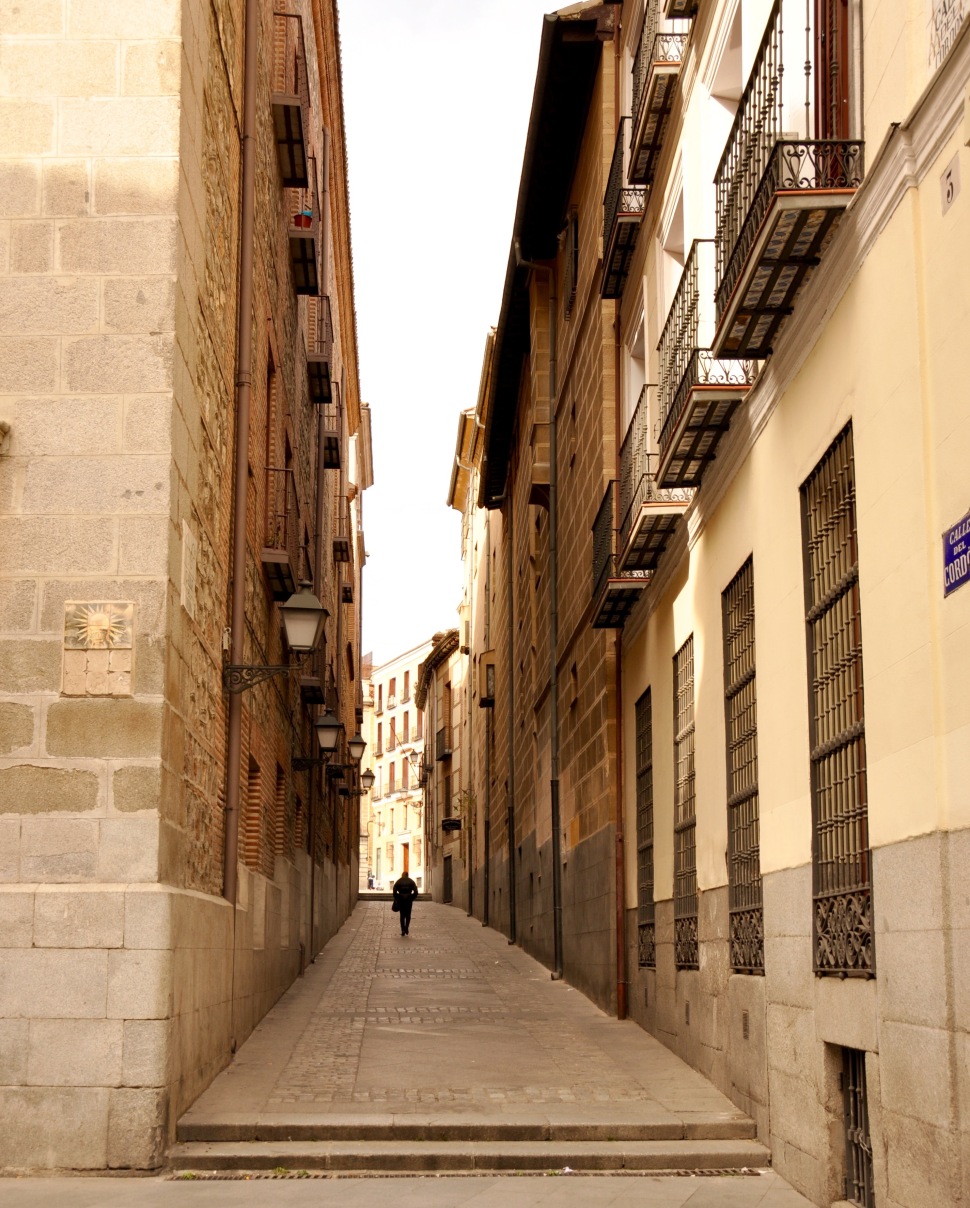 and the narrow alleys drew us further into the city. 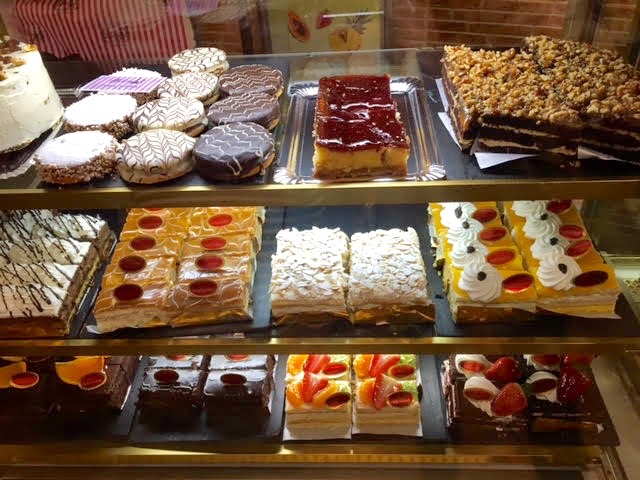 At one point, we could resist no longer and had to pop into a café for a coffee!

We were then able to work it off as we climbed up toward the Royal Palace and found ourselves on a hill overlooking a valley and on to the mountains in the distance.

Sharing a prominent position with the Royal Palace, is the Catedral de la Almundena.  The building, which was started in 1879, was  built on the site of a former mosque. Construction was only completed in 1993.  I loved the brilliant interior colors

Almost next door is the Palacio Real de Madrid, an expansive building that reminds one of Versailles. 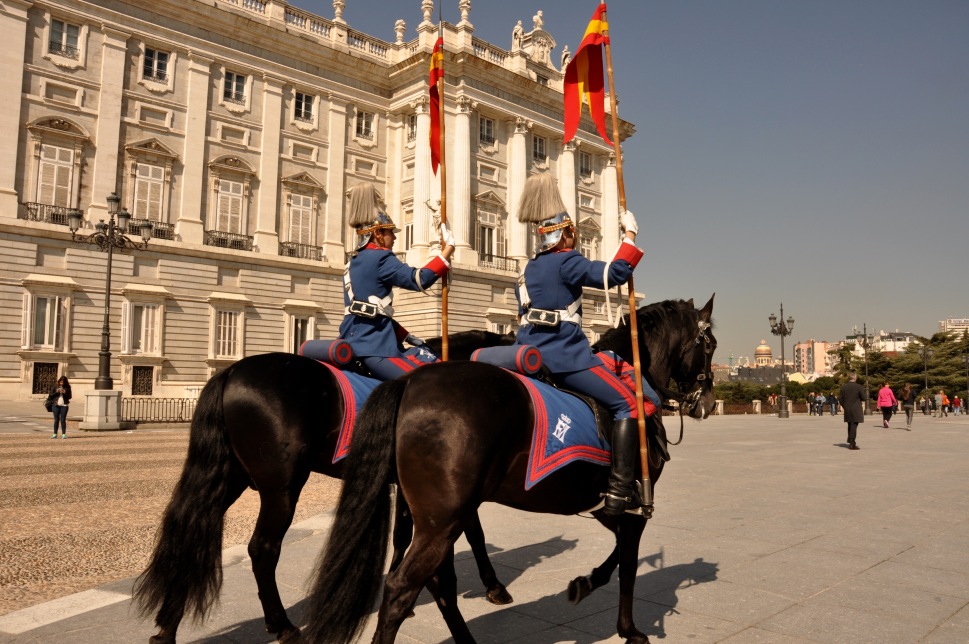 We didn’t take the time to go on a tour (we were starting to get a little hungry by this time), but we were impressed with both the architecture and grandeur. And by some of the….. 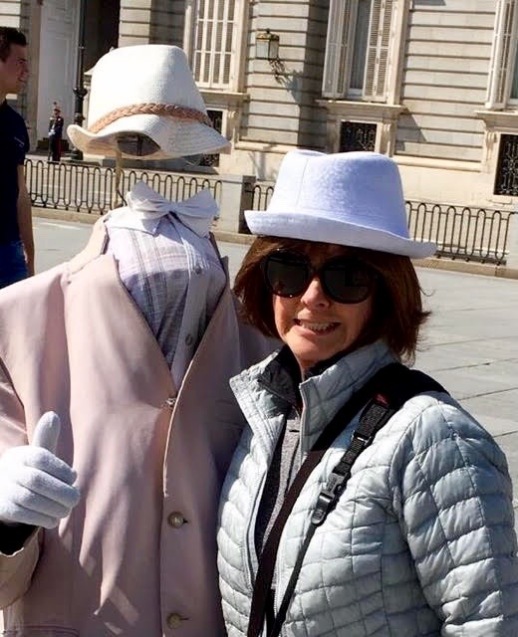 …..entertainment in the vicinity!  While reading up on Madrid in our Fodors book on Spain, we had made note of a little Tapas Bar, which was said to be inexpensive with great food.  That was the combination we were looking for!  So Jouko consulted his faithful phone GPS and we started in that direction.  What we found will forever set the standard for good food.

It was a small place with maybe 5-6 small tables.  Although our waiter did not speak English, the menu was in English as well as Spanish.

But he didn’t wait for us to order, instead he was telling us about some “tortilla” (and I’m thinking, I don’t want tortilla!  I’ve just come from Texas!).  But we nodded and he brought us a portion of an omelette of potatoes and onions, with 2 forks – which just melted in our mouths!  And then he was talking about artichokes, and I knew that I liked artichokes, but didn’t think Jouko would like it, but he brought it along anyway.  OH MY GOODNESS!  We have never tasted anything so delicious.  We were in Food Nirvana!  THE best food we have every tasted. 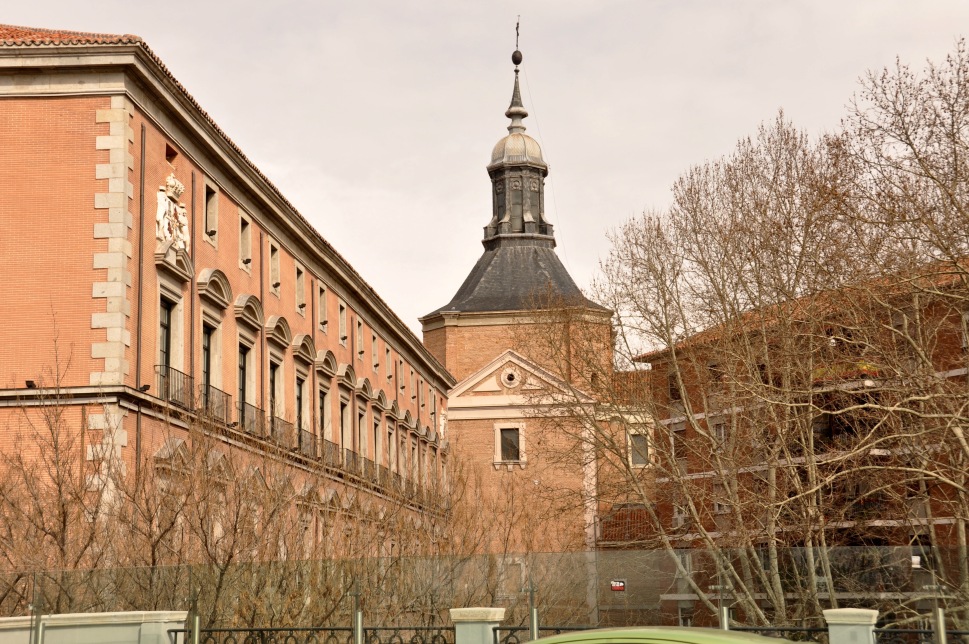 We were now ready to meander slowly back toward the hotel and take a nap so that we could last longer into the evening!

The squares were always occupied, often with the elderly watching the young, living in the moment while enjoying the sunshine!  Some Taberna signs were shockingly amusing, 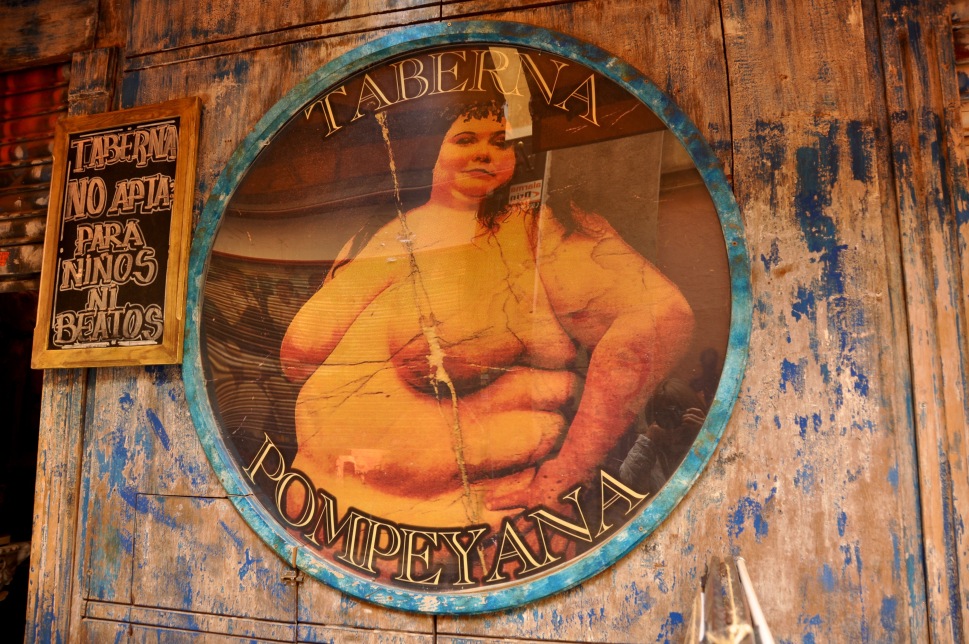 and others were very tasteful.

On our way back we had to cut through Plaza Mayor and this is what we found! What a sorry site!  We should all try to be better guests! As it turns out, Spain got their revenge;  Madrid won 8-7 on penalties!

Months ago, while planning this trip, our intention was to go to Morocco.  However, with all the craziness in the world, we decided that we did not want to risk it and so decided to spend longer in Spain.  Fodors had given us such good advice earlier in the day that we decided to consult them again, and this time chose a Moroccan restaurant!   Also, we wanted to blend in and eat like the locals, so we headed out and arrived at the restaurant around 8pm.  It was closed!  “Oh no, they must have closed down”, was my first response.  I won’t bore you with the longer version, suffice it to say that we were still too early.  It didn’t even open until 9pm.  We hung around and ate around 10pm!

As we walked back along an elegant boulevard (we needed to walk off that dinner), we came across this beautiful building.  In case you cannot read the banner hung at the front, it says “Refugees Welcome”.  We hope they still feel the same way in 10 years!

Of course there would have been so much more to see; the Prado for instance.  Since we only had just over one day to explore, we focused on seeing the sites of the Old City.  And even late at night, we felt completely safe.

Since we had eaten so late, we left Madrid without breakfast!

And as we walked across the street to the Madrid train station, we were conscious of what had happened at this train station in 2004 – almost exactly 12 years earlier.

We wanted to experience the high-speed train service, the AVE , and so planned to take it to Valencia.  Jouko had bought the tickets online about 10 days earlier.  It was such an easy, pleasant experience, but I was a little disappointed.  I was expecting to feel the train whizzing by at speeds of 300 kph (186 mph), but it was so smooth that one does not feel the speed!  Oh well, I’m sure there will be other “thrills” awaiting us.