On our arrival in Finland, Jouko’s good volleyball friend from the ’60s, Aukki, whisked us away to their unique, artistic and creative home by the ocean.  We spent the first night with them (his wife Hanne is also a volley-ball player),  before continuing to the countryside for a few days of golf. 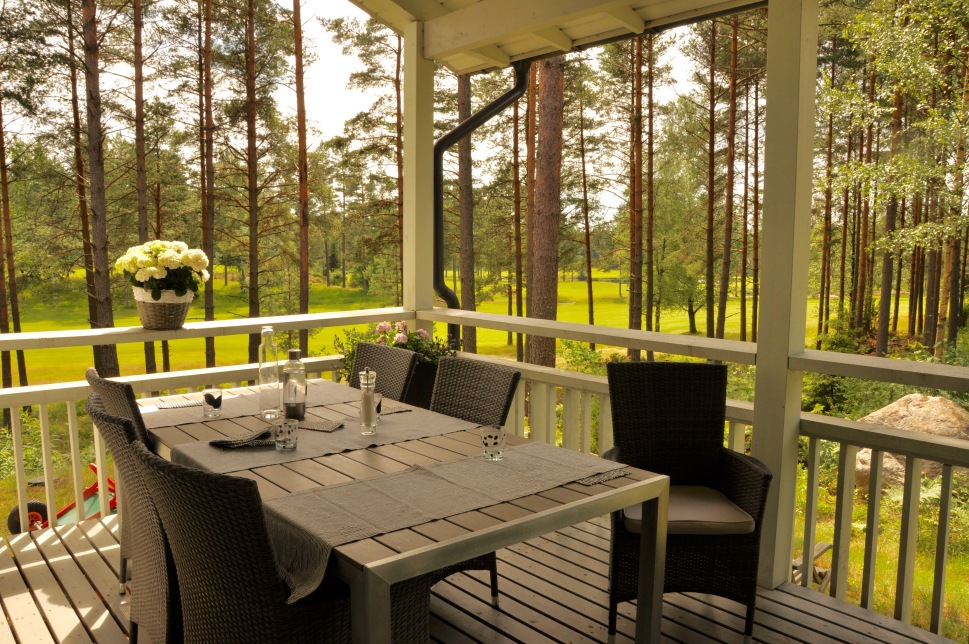 Hanne’s sister is married to another volleyball player and all 3 men played together in the JOPO volley-ball team  and on the Finnish National Team. But it had been at least 40 yrs since we had seen this couple.  Here is a view of the course from their lovely cottage on the golf course at NORDCENTER,  about 55 miles from Helsinki.

It was a wonderful reunion and while they all played, I…….blogged! 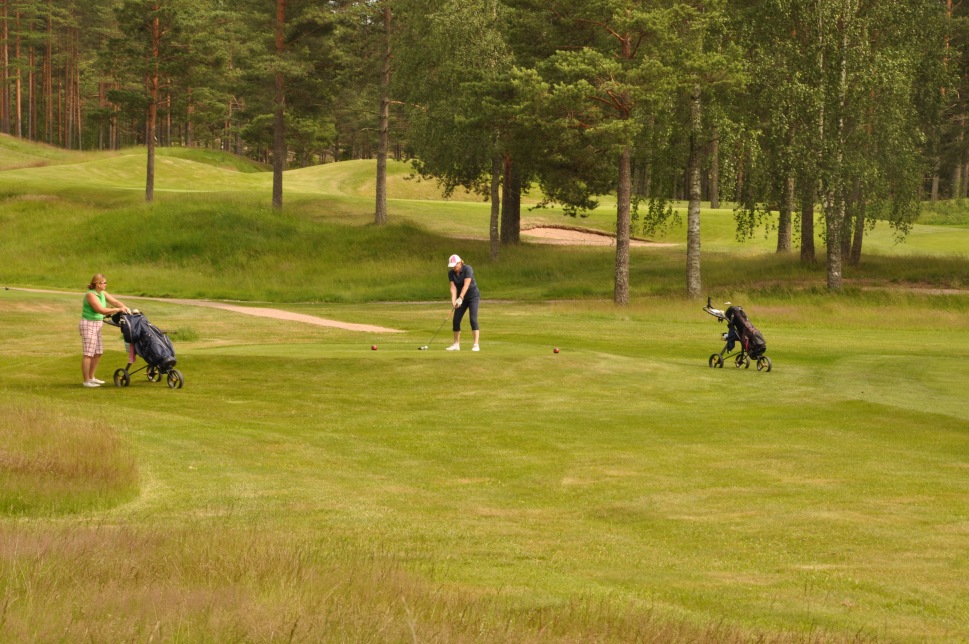 Hanne and her sister Eija, are also great golfers. 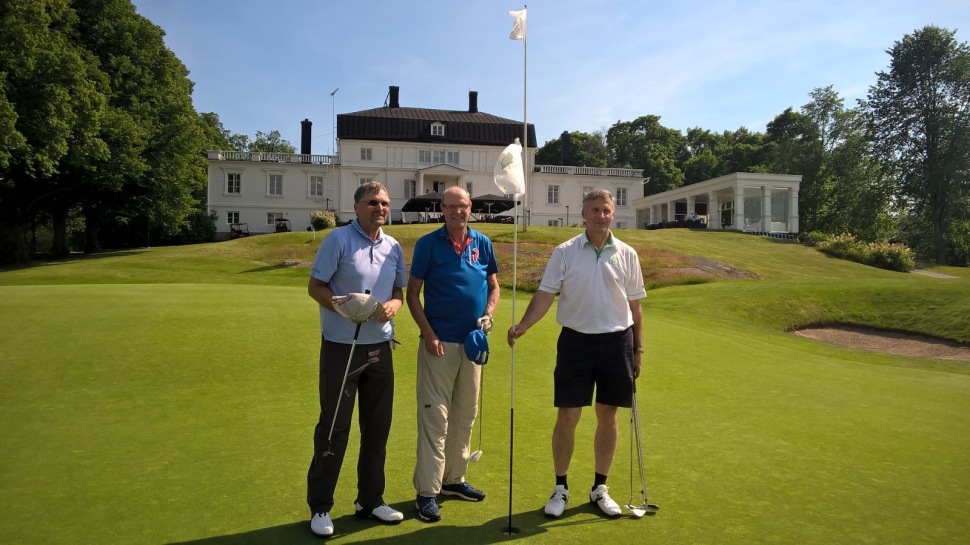 The clubhouse makes for a great backdrop for a picture opportunity!

In Helskinki, I found an Airbnb apartment on the same road where we had bought our first apartment and where Niklas was born – the bottom window on the extreme right’ 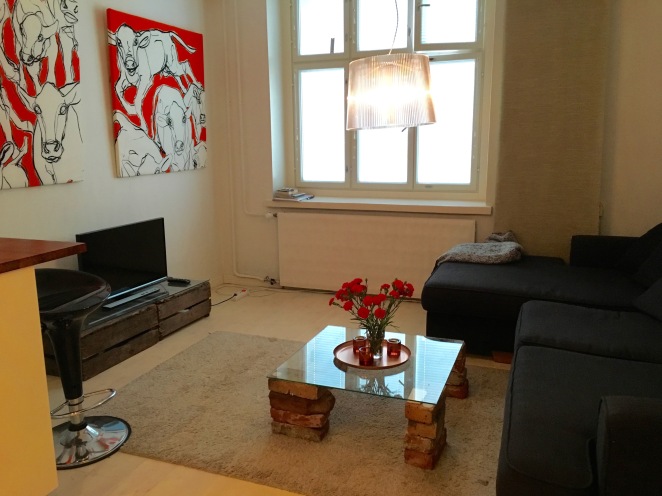 The 2 rooms and bathroom were very comfortable.

It had been 39 yrs since we had moved away from Finland and we wanted to take time re-explore the city. The suburbs of EIRA and ULLANLINNA lie directly south of Downtown. 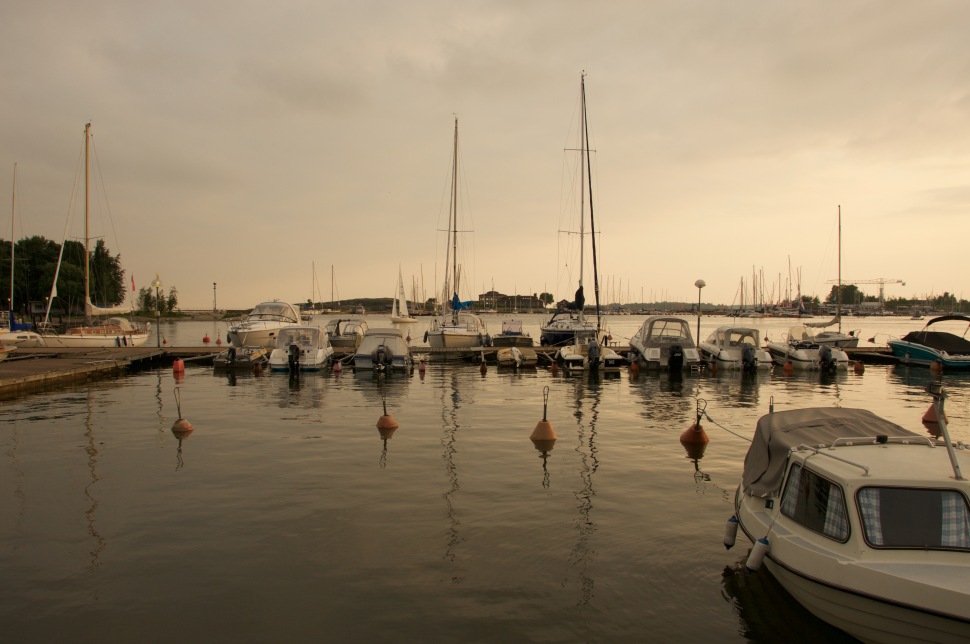 The seafront with restaurants, boats and recreation areas was just a block away… 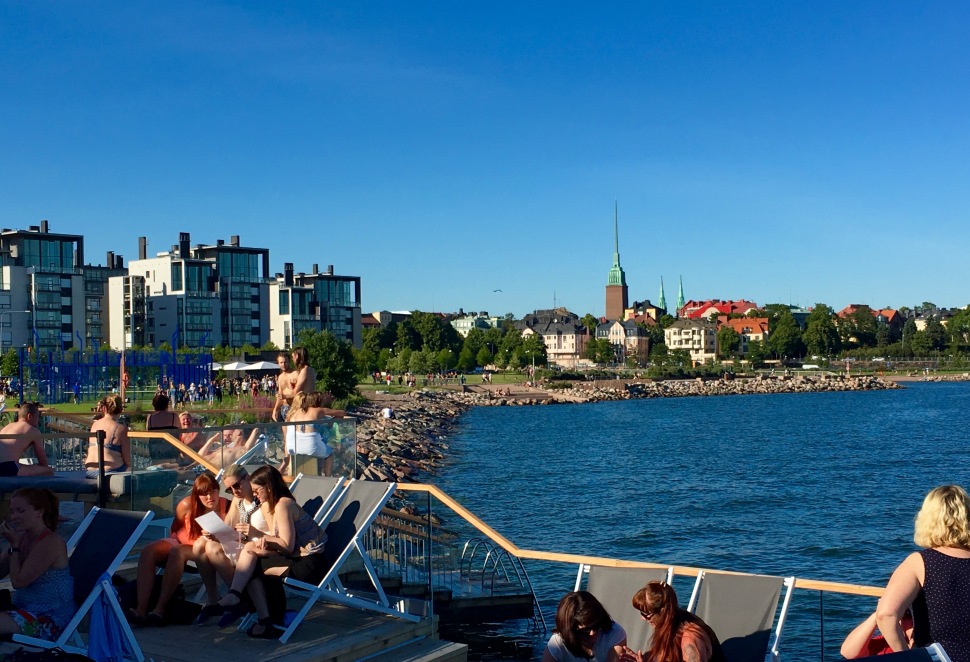 ……. and had developed so much since we lived there.

Within easy walking distance of the main City Market area, harbor and the city center. 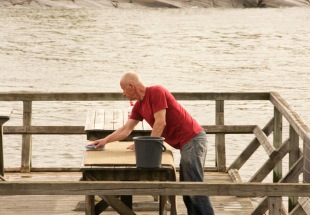 Along the way you might see someone washing their carpets! 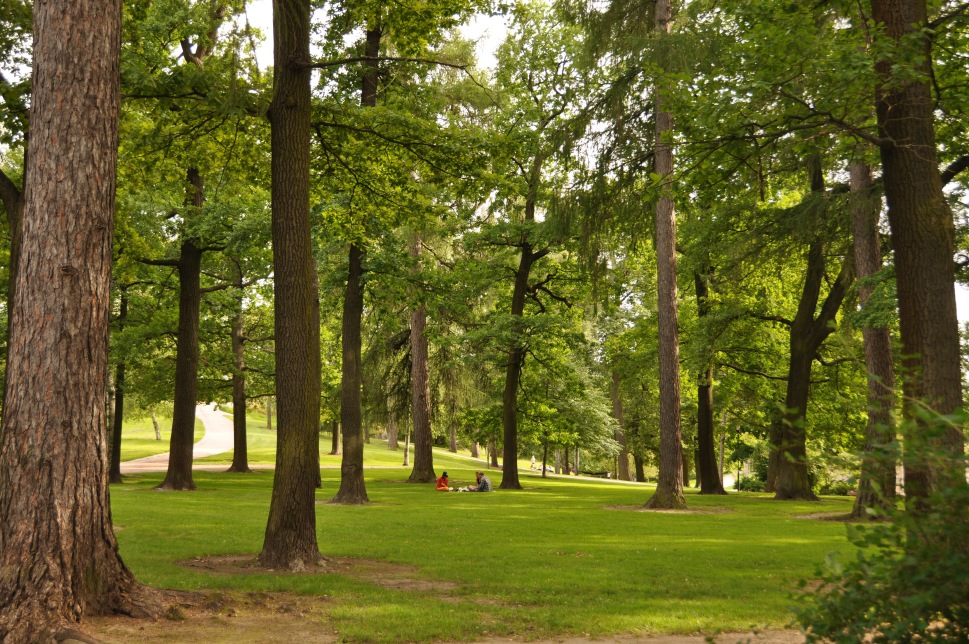 Kaivopuito, a beautiful park was just minutes away….

…and from the top of the hill, one has this gorgeous panoramic view, looking south.

Helsinki has so many beautiful buildings, all built around 1900. 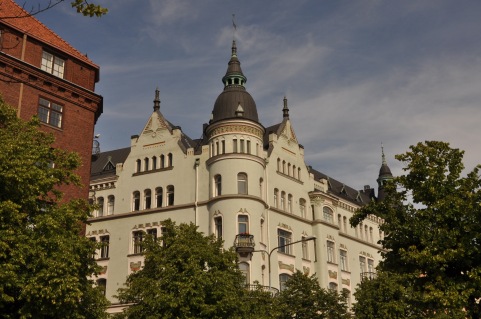 Some Art Nouveau and some almost palatial!

As we wandered the streets, Jouko found his old High School, still in use (and as one person said, “still standing after all these years” 😀).

There are only a few wooden structures still standing.

Not having a car, we bought a 2 week City Pass for trams, buses and some trains.It was a very efficient system.

We wanted to get a coffee and doughnut in the Market Square – for old time’s sake – and also take a sight seeing tour of the harbor islands.

Somehow it always tastes best outside.

The Finnish handpicked blueberries were at their best, along with an abundance of chanterelle mushrooms, other fruits, veggies and flowers.

The busy port lies directly East of Downtown.  Large cruise ships are often seen docked as well as the daily ships running between Helskinki/Talinn and Helsinki/Stockholm.

As we left the harbor we were not sure how the weather would co-operate, but it turned brighter and we enjoyed the views.

Of course embassies are always found on prime real estate; here the US Embassy (both buildings; The Old and New).

We wove in and out of the islands, some inhabited……… 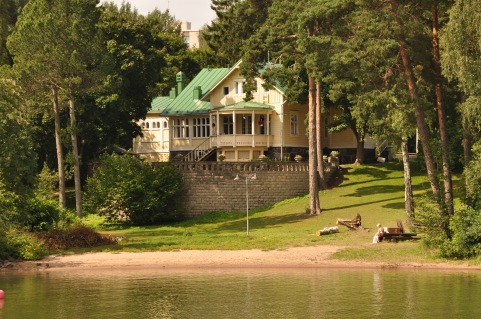 with cottages and the obligatory ……… 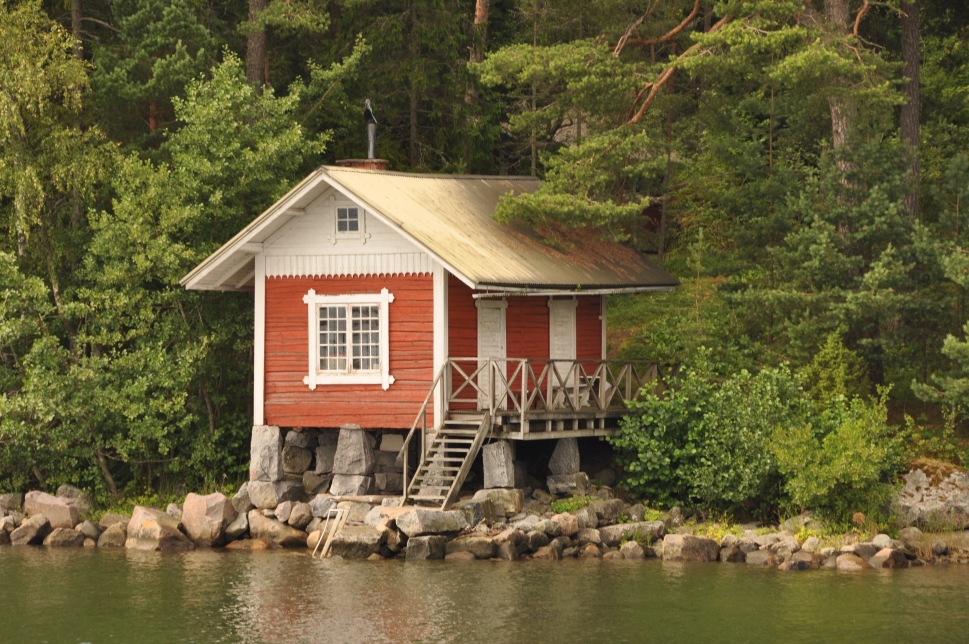 …… sauna down by the water. 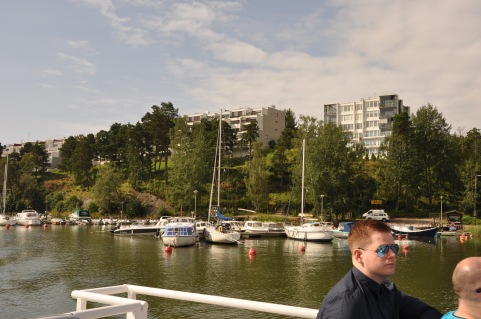 Other homes were examples of the modern Finnish architecture. 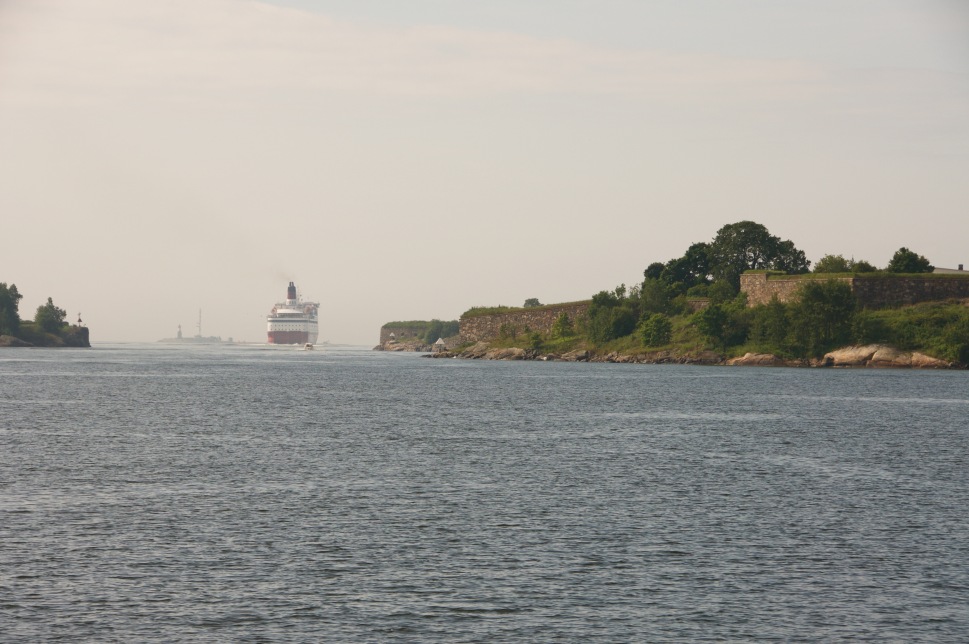 Suomenlinna, the fortress built in 1748 when Finland was still part of Sweden, lies to the right.

As we returned to the harbor, the USPENSKI Eastern Orthodox Cathedral dominated the horizon along with the Ferris Wheel.

Built during the reign of Emperor Alexander ll when Finland was a Grand Duchy of Russia, it was completed in 1868.  It remains the largest Orthodox church in western Europe.

One can just see the priest, with his white robe, disappearing into the back.

So interesting to see this style and design after the splendor and lavish richness of the churches in Italy. 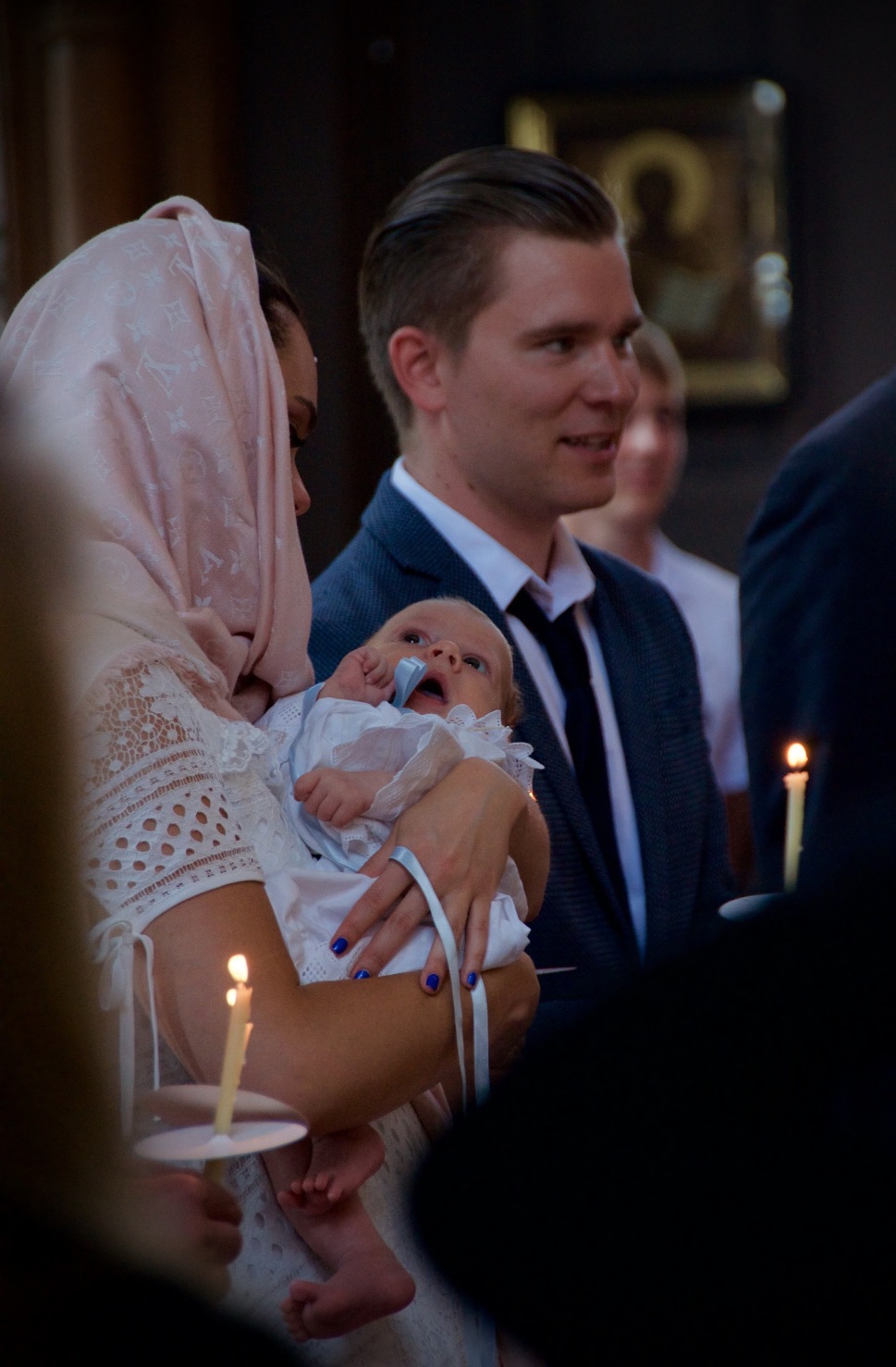 We were so fortunate to witness the christening of an infant.  The echoing chants were almost spell-binding.

As we left the main harbor and cathedral behind us, we came to the Northern Bay, located Northeast of Downtown. 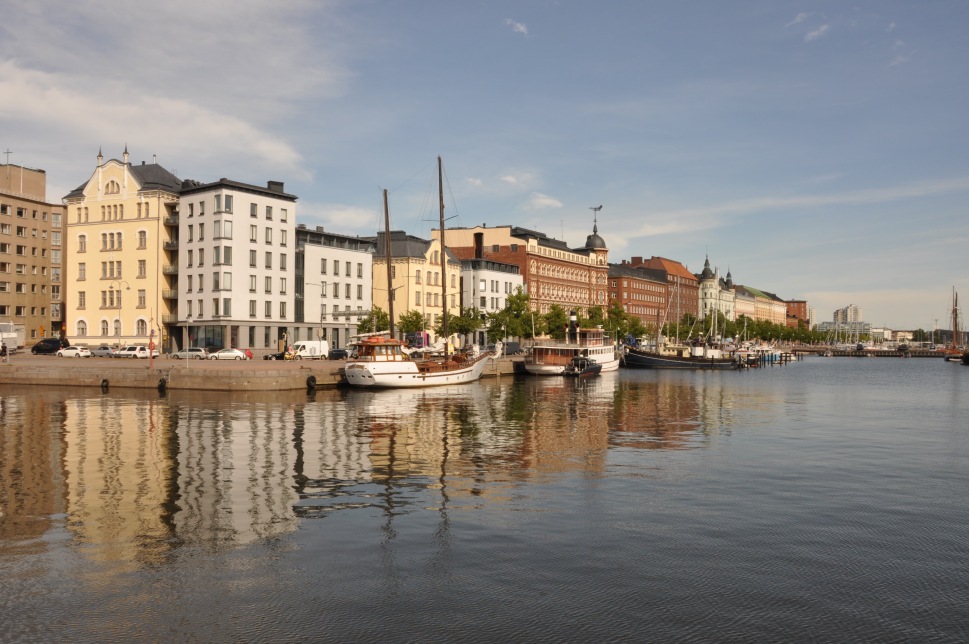 Quite by accident we came across this building which was the secret recruiting office of the 1st Military Unit in 1915, 2 yrs before Finland’s Independence. One can still the holes left by mortar shells from both World Wars.

I wanted to visit Kallio Kirkko (stone church) which sits high on a hill and is built entirely of grey granite, with strong influences of Art Nouveau.

It was touching to see a mother explaining something to her young daughter.

Jouko and his former volley-ball mates have remained very close through the decades.  They have regular get-togethers and he has returned a number of times to join in one anniversary or another. 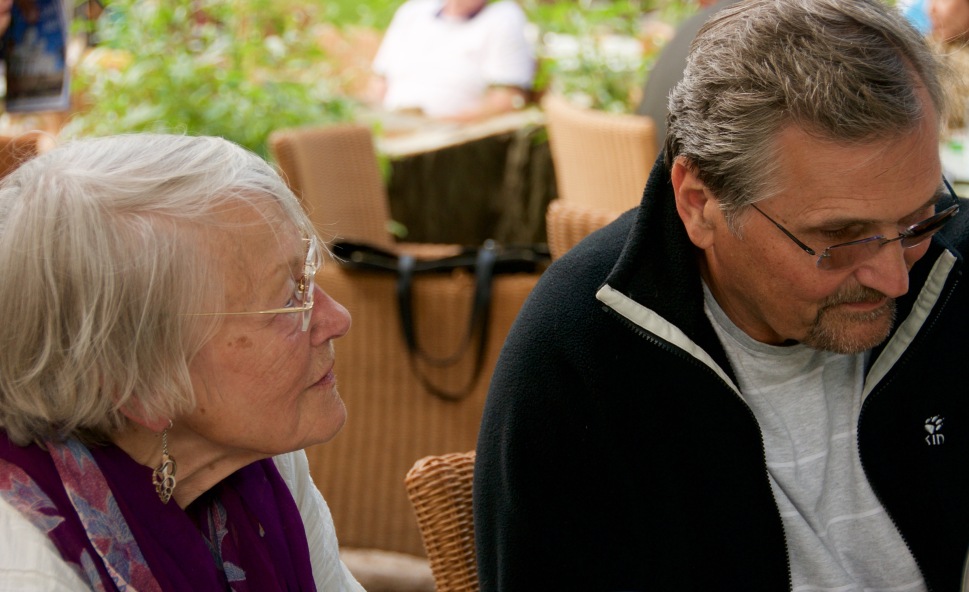 The Matriarch of the group, Inkeri, is the wife of Jouko’s former volley-ball coach and a former player, herself. 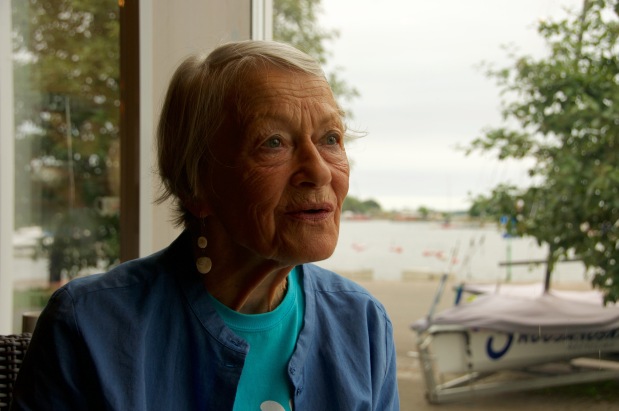 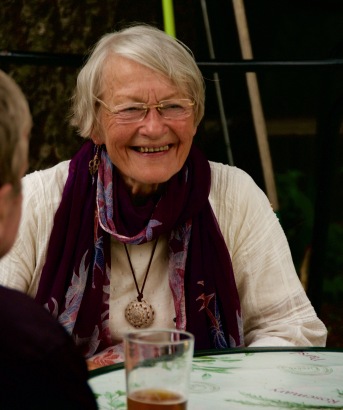 She remains vibrant in her mid 80s and rides her bike everywhere – even putting it on the train to ride to her final destination. 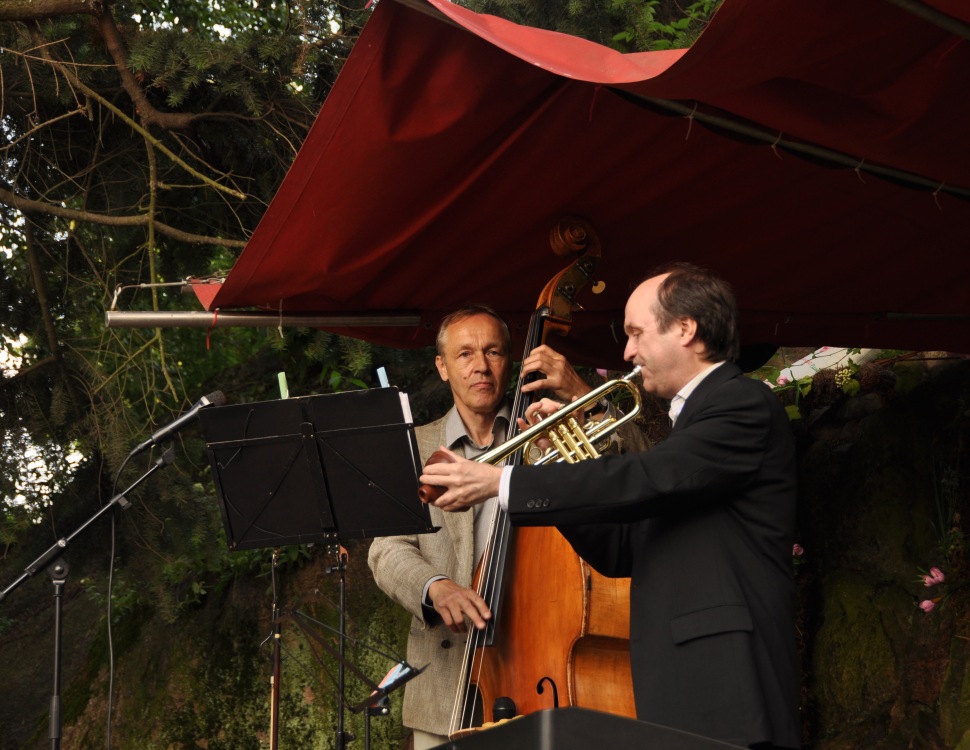 We attended an outdoor jazz concert with her, where her eldest son was playing base.

Over the two week period we met with a number of his closest friends.

Jouko started playing with these guys when he was 16 yrs old – several years before I came on the scene!  Their team, JOPO, won two national league championships & both Oiva and Cicero played in the National Team.

Aila and their son Jussi came for a one day’s visit.  After all, Helsinki was their childhood home. 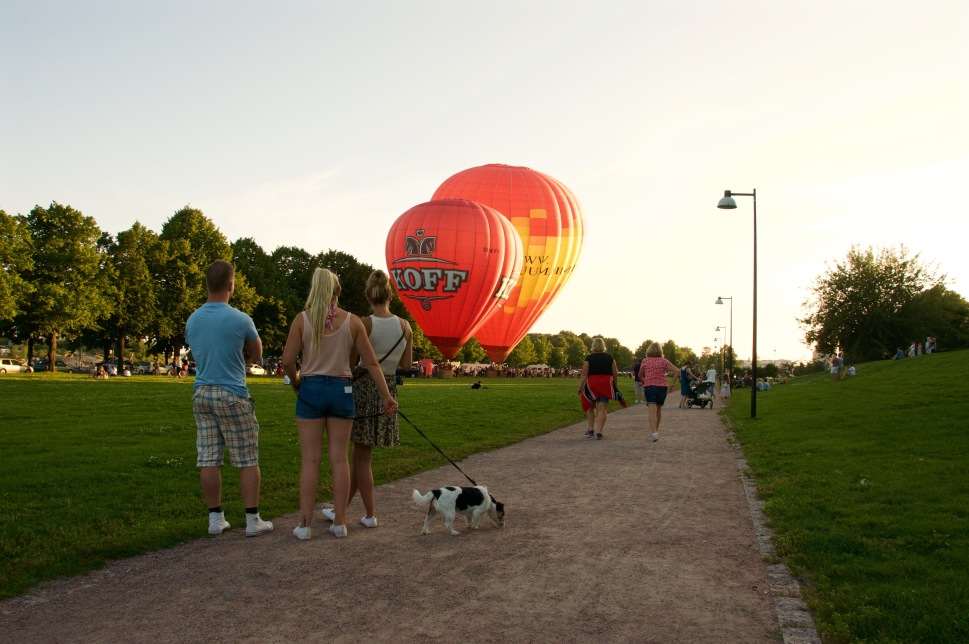 On another evening, while walking down to the seafront, we came across the filling and launching of these balloons. 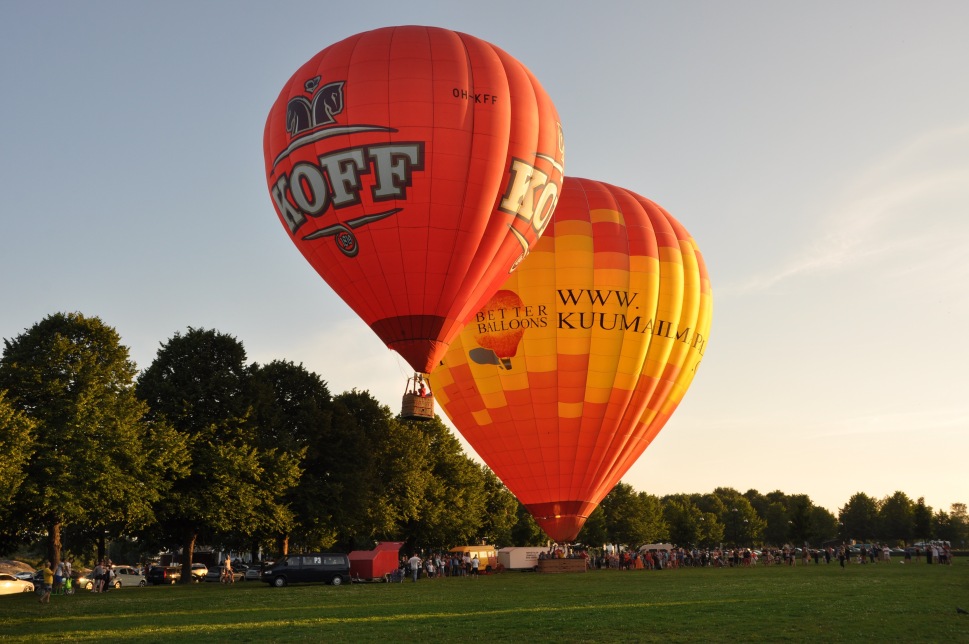 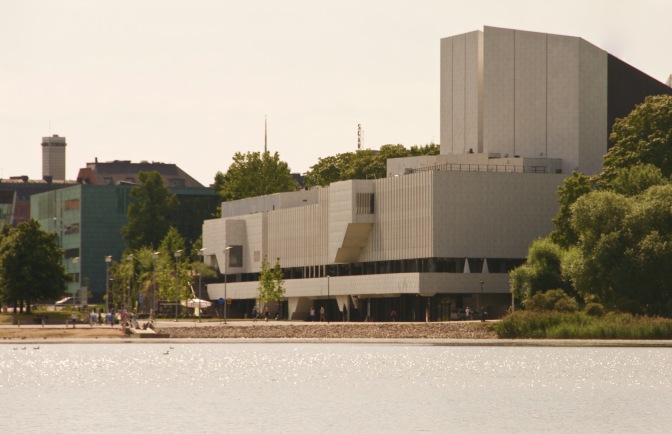 On an inland piece of water, is the famous Finlandia House, a beautiful, ultra modern concert hall.

Also sharing the water are hotels, restaurants, water sports and….. 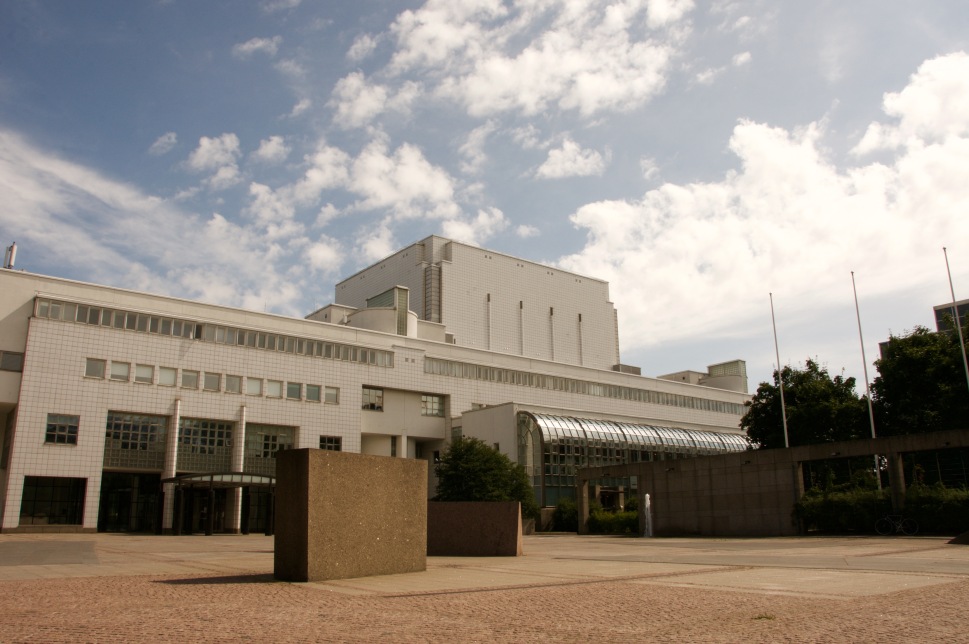 And perhaps the newest church to be built in the city is this unusual chapel, Kamppi Chapel, built in a modern square. It won the International Architecture award in 2010.

It is known as the “chapel of silence” since it is intended to be a place where busy people can come for a quiet moment of reflection in one of the busiest places in Finland.

(This is a photo of a postcard, to give an idea of the beautiful interior).  Lit only by the small windows around the roof, it is a wonderful example of modern Finnish architecture; using nature in it’s purest simplicity.

There was one more place I wanted to visit “for old time’s sake”; SEURASAARI.

It is a beautifully maintained outdoor museum on an island, not far from the heart of the City. 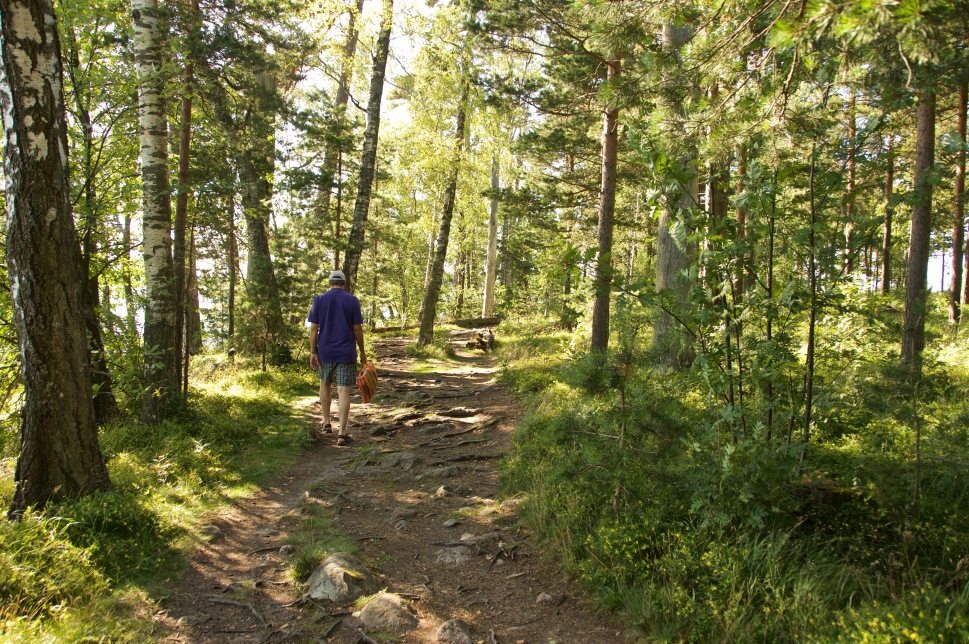 We took a little picnic with us.

Some young girls working in one of the cafes dressed in period costume. 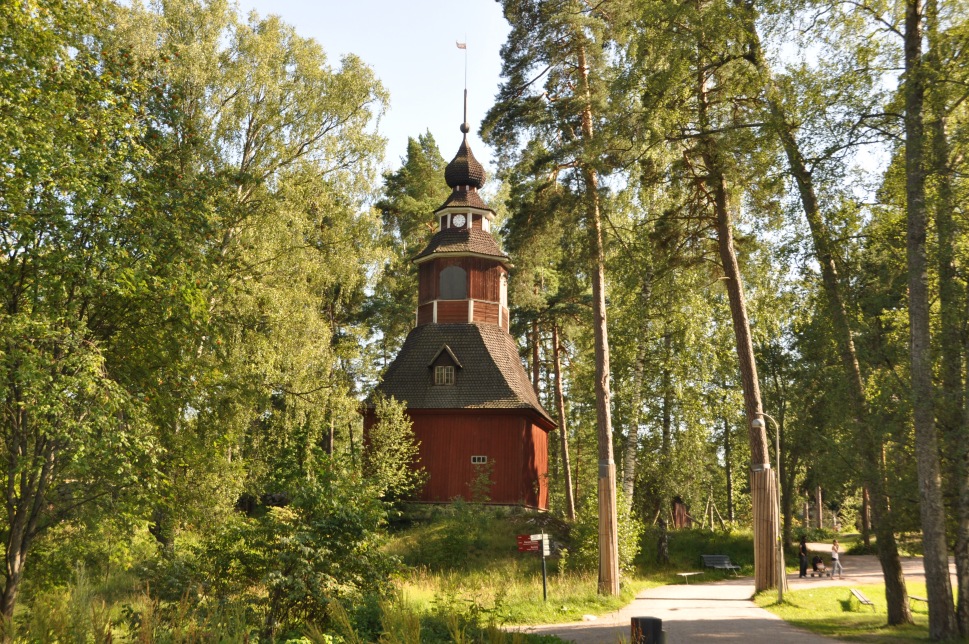 The picturesque church that is still in use. 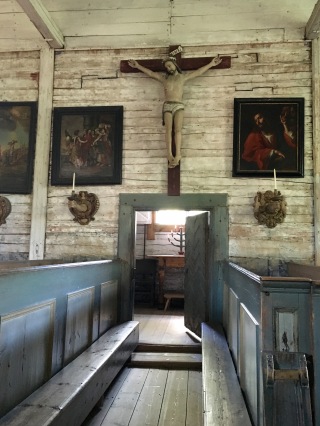 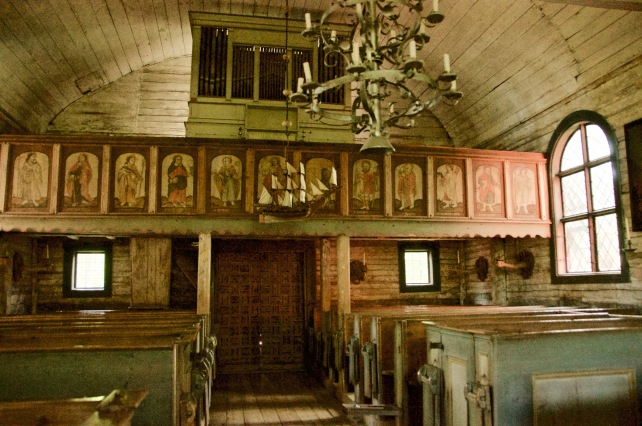 I just loved the primitive paintings and the colours. 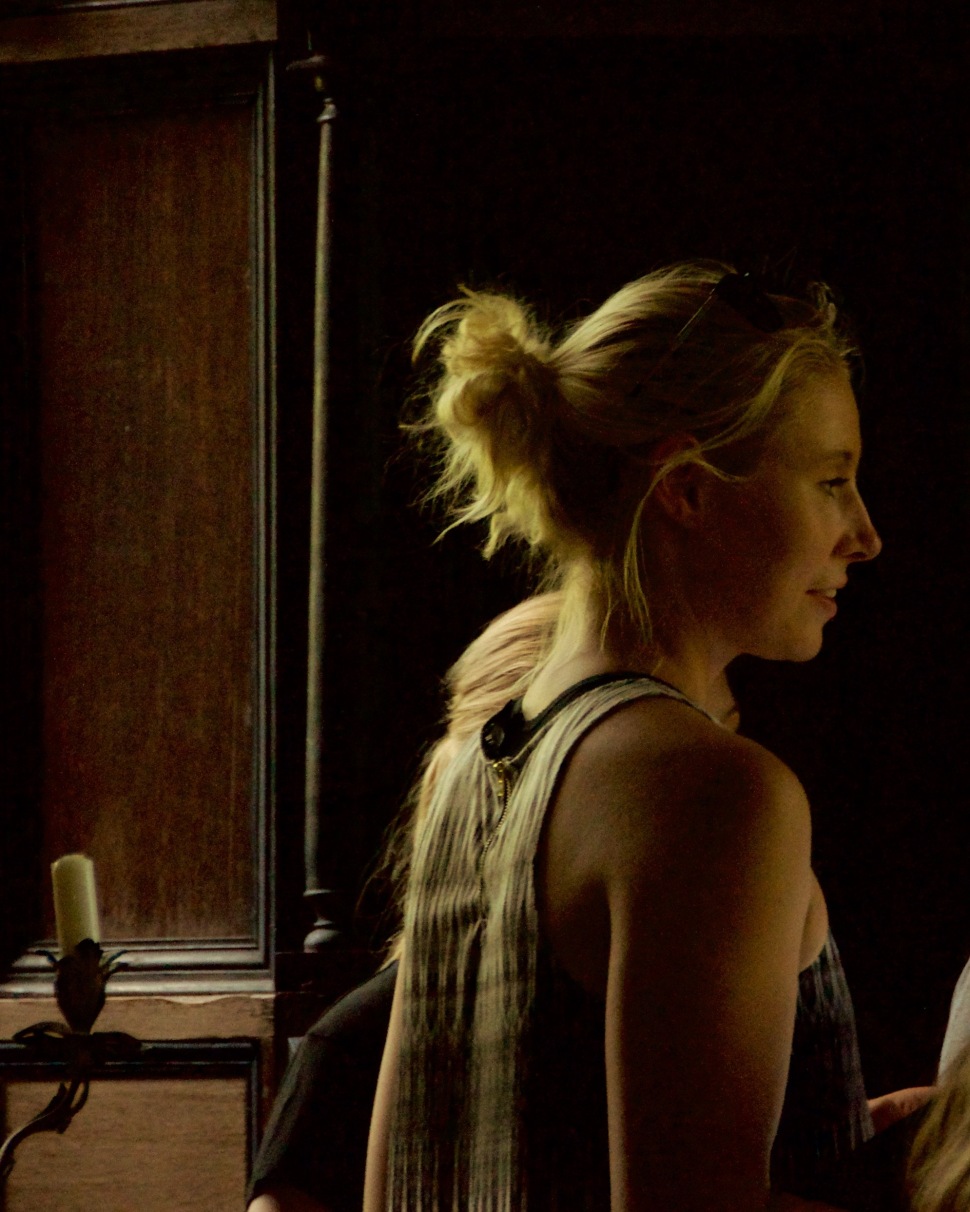 A group of young people were practicing for what sounded like a Christmas concert.

There are a couple of beaches for those hardy enough to swim.  Not me!

Across the bay one can see the City. 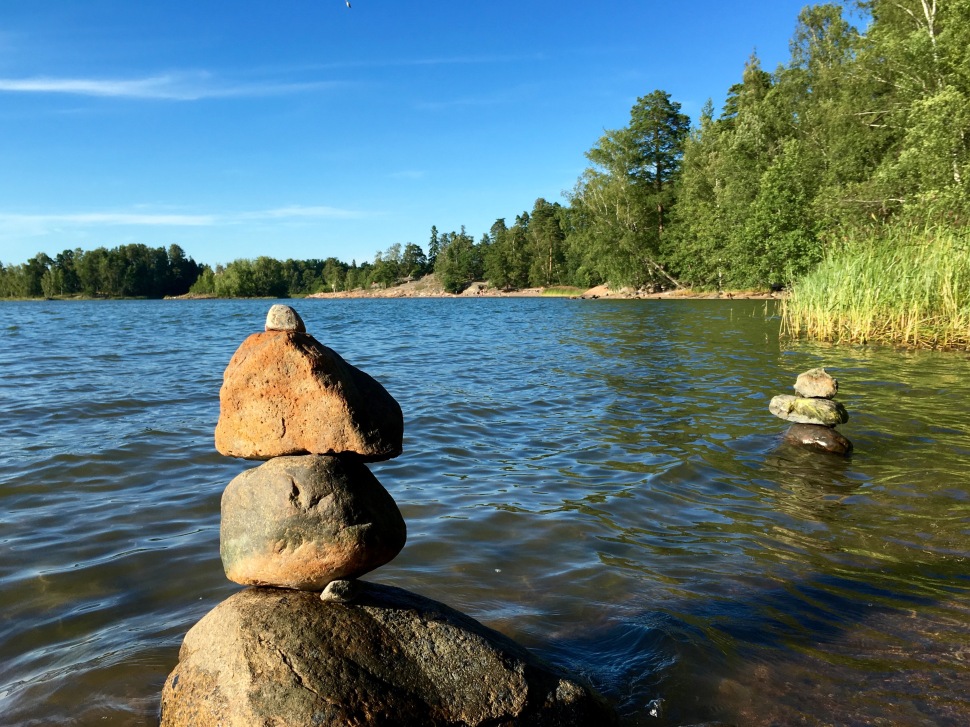 And so our two week stay came to an end.  During this time, wonderful memories were brought out, dusted off and remain shiny bright once again.